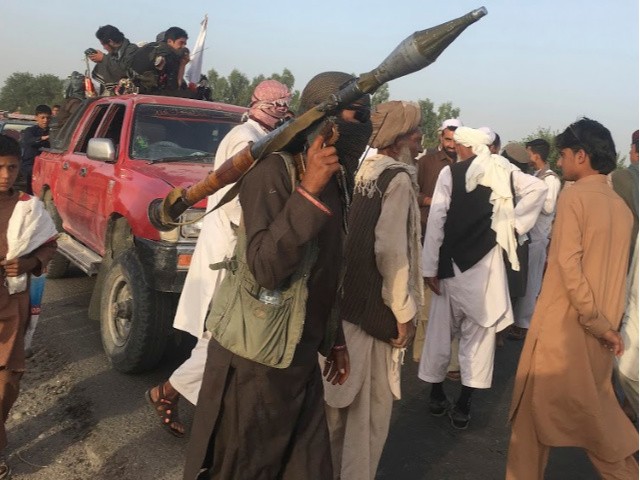 Taliban jihadis on Wednesday repudiated U.S. President Donald Trump’s proposal of leaving behind a residual American force in Afghanistan to carry out “counterterrorism” operations if the United States military withdraws from the country as a result of a potential peace pact with the terrorist group.

The Taliban has long demanded the complete withdrawal of foreign troops before it agrees to a peace deal. U.S. Army Col. Chris Kolenda, who helped set up a back channel with the group, told the Daily Beast last year that the jihadis were open to a small American military force remaining in Afghanistan to “continue training Afghan soldiers—including, hypothetically, ex-Taliban commanders,” among other things.

Taliban terrorists reportedly changed their position. Responding to Trump’s State of the Union Address, a Taliban official stressed that “all” foreign troops must leave Afghanistan.

“At the first step, we want all the foreign forces to leave and end the military presence in our country,” Sohail Shahin, a spokesman for a Taliban’s political office in Qatar, told Reuters.

“But after ending their military presence, their non-military teams can come and we need them too, they can come and take part in the reconstruction and development process,” he said, echoing other Taliban leaders who expect the United States to continue footing the bill for reconstruction after American troops leave the country.

It appears that the Taliban wants to rid Afghanistan of America’s troops but not its money. As part of ongoing peace discussions, the Taliban claimed the U.S. has “promised” to continue funding nation-building efforts in Afghanistan — which have already depleted America’s coffers by more than $132 billion since the war began in October 2001.

On Tuesday, members of the Senate Armed Services Committee expressed concerns that a military withdrawal would reduce oversight over the hundreds of billions in American taxpayer funds devoted to Afghanistan each year, a stream of money expected to continue pouring into the war-ravaged country after a drawdown of the U.S. armed forces.

U.S. Gen. Joseph Votel, the top American commander in the Middle East and Afghanistan, told the Senate panel that the United States will have to continue funding the struggling Afghan security forces post-withdrawal to the tune of hundreds of millions annually to ensure they keep the region safe.

According to Afghan President Ashraf Ghani, his country’s security forces would collapse in six months if the United States were to withdraw its military support.

Under President Trump, the U.S. has intensified peace-seeking efforts in Afghanistan in recent months after making the negotiated “political reconciliation” between the Taliban and the Afghan government the primary tenet of its strategy to end the more than 17-year-old war.

“I have also accelerated our negotiations to reach — if possible — a political settlement in Afghanistan,” the American commander-in-chief told the U.S. public on Tuesday. “The opposing side is also very happy to be negotiating.”

At a high blood and treasure cost of nearly $1 trillion, 2,278 service member deaths, and 20,425 injuries, primarily at the hands of the Taliban, the war in Afghanistan is America’s most protracted military engagement — raging since October 2001.

“Great nations do not fight endless wars,” President Trump proclaimed during the State of the Union address, adding:

We do not know whether we will achieve an agreement, but we do know that, after two decades of war, the hour has come to at least try for peace.  And the other side would like to do the same thing.  It’s time.

While the United States has made progress in peace talks with the Taliban, the process is still at its early stages, Gen. Votel conceded on Tuesday.

The top general vowed to continue applying military pressure on the Taliban to convince them to engage in direct talks with Kabul. As it stands now, one of the primary points of contention between the Taliban and the United States is the terrorist group’s reluctance to negotiate directly with the Afghan government.

Taliban jihadis have long dismissed Kabul as U.S. “puppet.” The group, which is fighting to implement strict Islamic laws or sharia, considers itself the only legitimate government of Afghanistan. Taliban leaders claim they do not want to rule Afghanistan alone.

In recent days, details of a framework to continue peace negotiations surfaced, mainly revealing that the United States is willing to withdraw from Afghanistan in exchange for Taliban assurances that no other terrorist group, including al-Qaeda and the Islamic State (ISIS/ISIL), will use the South Asian country to plan and conduct attacks against the U.S. and its allies.

The United States has a single vital national interest in Afghanistan: to prevent it from becoming a safe-haven from which terrorist groups can plan and execute attacks against the U.S. homeland, U.S. citizens, and our interests and allies abroad.

Echoing recent comments by CIA Director Gina Haspel, Trump told CBS News over the weekend he is considering leaving behind a smaller force to ensure the Taliban keeps its promise.

A “monitoring regime” would be necessary to bind the Taliban to prevent terrorist groups from using Afghanistan for international terrorism and to ensure the group keeps its pledges.

The Trump administration has come out in support of Kabul’s olive branch offer to the Taliban of a ceasefire and official recognition as a political group, effectively granting the terrorist group the opportunity to return to power.

Soon after invading Afghanistan in response to the Taliban harboring al-Qaeda before 9/11, U.S. troops and local fighters ousted the terrorist group’s regime at the end of 2001.