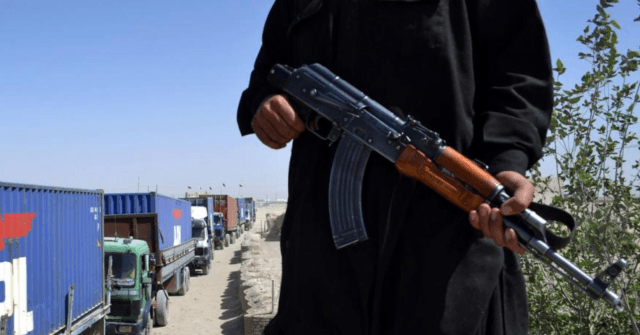 Taliban narco-jihadists on Friday announced the launch of their “Victory” spring offensive amid ongoing U.S.-led efforts to convince the terrorist group to agree to a political settlement with Kabul to end the more than 17-year-old war in Afghanistan.

The operation’s goal is to establish an “Islamic system” in an Afghanistan “cleansed from American occupation,” the group declared on Friday, Voice of America (VOA) reports.

“Our jihadi obligation has not yet ended. Even as large parts of our homeland have been freed from the enemy yet the foreign occupying forces continue exercising military and political influence in our Islamic country,” the Taliban added.

According to the latest assessment by the U.S. government, the Taliban controls or contests more than 45 percent of Afghanistan where over 35 percent of the population resides.

Taliban jihadis generate most of their funding, estimated in the hundreds of millions, from trafficking and cultivating opium and heroin. Although the United States has devoted nearly $9 billion on counternarcotics operations since the war began, Afghanistan remains the world’s top supplier of opium and heroin, a small portion of which is making its way onto U.S. streets amid the historic opioid crises.

The strength and influence of the Taliban reached unprecedented proportions under the previous administration and have continued to grow amid the peace talks to the detriment of the Afghan government.

Citing “suspicious” actions by international organizations during a vaccination drive, the Taliban on Thursday announced a “ban” on the International Committee of the Red Cross (ICRC) and the World Health Organization (WHO) in the areas it controls.

“They have not stuck to the commitments they had…and they are acting suspiciously during vaccination campaigns,” Zabihullah Mujahid, a spokesman for the Taliban, proclaimed on Thursday without providing details, Radio Free Europe/Radio Liberty (RFE/RL) notes.

Afghanistan is one of the few remaining countries where polio rates are still growing in part due to similar Taliban bans.

Khaama Press (KP) quotes the Taliban as saying in its spring offensive statement that fighters from the group “possess unbreakable jihadi determination and benefit from armed experience, new tactics, public support, influence inside enemy ranks, and advanced weapons. Therefore, we are hopeful that with help from allah … large areas including townships and other centers shall be cleansed from enemy presence.”

Referring to the spring offensive announcement, VOA noted that some observers believe the move is “largely symbolic because insurgents in recent years have not eased battlefield activities during winter and have staged major attacks against Afghan forces as well as their U.S.-led NATO partners.”

Despite intensified peace-seeking efforts by U.S. President Donald Trump’s administration in recent months, the Taliban continues to refuse to allow Kabul to participate in the negotiations, arguing that the Afghan government is an American “puppet.”

The Taliban, which has long been fighting to establish strict Islamic laws or sharia, considers itself the only legitimate government even though the U.S. military removed the group’s regime from power soon after invading the country in October 2001.

Trump administration officials have made the negotiated reconciliation between the Taliban and Kabul the primary tenet of the president’s strategy to end the war.

Reconciliation may grant the terrorist group the opportunity to return to power. Taliban jihadis have long maintained they will only talk to Kabul after the complete withdrawal of foreign forces from Afghanistan.

Last month, negotiations yielded two draft agreements — the withdrawal of U.S.-led foreign forces and assurances from the Taliban that it will not allow Afghanistan to serve as a sanctuary for anti-American international terrorists like al-Qaeda and the Islamic State (ISIS/ISIL).

U.S. and Taliban negotiators are scheduled to resume peace talks in late April to try to reach an agreement on a timeline for foreign forces to exit Afghanistan in exchange for the terrorist group’s counterterrorism assurances.

Furthermore, the Taliban has voiced opposition to a Trump administration plan to leave behind a residual counterterrorism force to ensure the narco-jihadis keep their promise.

The Taliban has actually intensified deadly attacks against the Afghan security forces, civilians, and the American military amid the ongoing peace talks, reportedly killing more than 200 people, including three American troops and a contractor, and wounding many others within the past week alone.