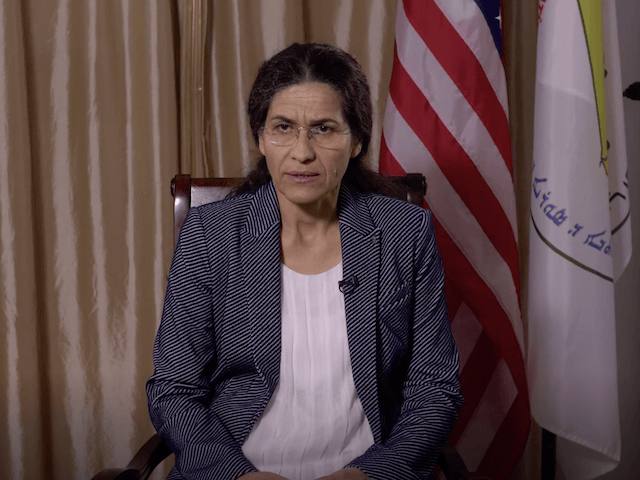 Syrian Kurds who helped the United States decimate the Islamic State (ISIS/ISIL) are reluctantly turning to Russia and its Syrian regime ally for assistance in protecting their lands from a planned attack by NATO member Turkey as the U.S. prepares to draw down its military presence in Syria, a Kurdish leader told Breitbart News.

Elham Ahmad, the co-president of the Kurdish Syrian Democratic Council (SDC), the political wing of the U.S.-backed Syrian Democratic Forces (SDF) fighting ISIS, spoke to Breitbart News through a translator about her coalition having to go to Russia and dictator Bashar al Assad for help.

“We don’t like or prefer this scenario,” she said. “If we enable the regime on our border, that would be considered a defeat to the democratic project that we were able to build. We were forced to choose — either Turkish tanks and aerial bombardment … or putting the regime forces on the border between us and Turkey.”

“But this is the last thing we want to see because we prefer to keep working on our democratic project,” Ahmad added.

Syrian Kurds have declared autonomy from Damascus but would like to remain part of the country, she said, something that Assad has indicated he may be open to. Kurds in Iraq operate under a similar system, managing the Kurdistan Regional Government (KRG) based in Erbil under Baghdad’s authority.

The SDF is led by the Kurdish People’s Protection Units (YPG), which also make up the majority of the group. YPG fighters are the armed wing of the Kurdish Democratic Union Party (PYD) that has maintained control over large swathes of northern Syria near the Turkish border with the help of the United States.

U.S. support for the Syrian Kurds has infuriated Ankara, which considers the YPG and PYD to be part of the Kurdistan Worker’s Party (PKK) terrorist group that has been waging a decades-old insurgency inside Turkey, an accusation denied by Ahmad.

Ahmad also spoke to Breitbart News about U.S. plans to pull American troops from Syria, a process that Gen. Joseph Votel, the top United States commander in the Middle East, said would be slow and coordinated with partners on the ground.

“We respect the choices of the American people,” she declared. Ahmad spoke in favor of a slow and coordinated withdrawal.

“If the withdrawal would go fast, uncoordinated and not studied well and if the American forces do not consult with the partner forces on the ground, us, if the withdrawal is sudden this will create a lot of problems,” she said. “The area would be subjected to more threat from external powers.”

The Kurds faced the prospects of making a pact with the Iranian- and Russian-backed Assad regime to repel a possible attack by Turkish forces in the wake of U.S. withdrawal announcement, Ahmad explained.

“In light of the surprising American withdrawal, we find ourselves isolated,” she said. “I mean, we need to find solutions for our people. So we talked to the Russians and asked them to deliver this message to the Assad regime.”

“The idea was if Russia allows Syrian army forces to be dispatched along the border between Assad and Turkey, that will stop the Turkish threat,” she continued.

Turkey has repeatedly threatened to attack the Kurdish-held areas in Syria, saying that it is ready for the military incursion.

So far, Tukey has refused Trump’s request for assurances that Turkey will not attack the U.S.-backed Kurds.

“The most important issue for us in light of the American withdrawal is that we get guarantees and assurances that our area is not going to be attacked by anybody. That the U.S. partners on the ground will not be slaughtered by anybody,” Ahmad told Breitbart News.

“Even a small American presence in our area, symbolically speaking, it means a lot and also, technically speaking, they could be of great help for sharing intelligence and working together to defeat the sleeping cells of ISIS who are not threatening us but the entire world as well,” she added.

U.S. National Security Advisor John Bolton has indicated that a residual American force will remain in Syria to combat the Iranian threat. Moreover, the Trump administration has stressed that there are no plans to pull out the 5,000 U.S. forces in neighboring Iraq, which are expected to be able to cross into Syria if necessary.

The Syrian Kurds have turned to Assad in the past to counter attacks from pro-Syrian opposition Turkey, particularly in Afrin.

Echoing a recent report from the Pentagon inspector general, Ahmad warned about the lingering threat in Syria posed by ISIS. The Kurdish leader also cautioned about the growing al Qaeda menace in Syria.