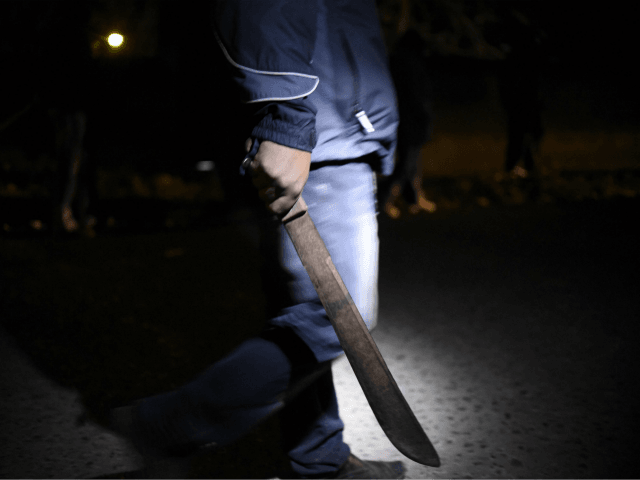 Syrian and Afghan asylum seekers attacked a village disco in a small German village armed with machetes after two were kicked out by a bouncer.

The incident occurred on Saturday in the village of Trebbin in Brandeburg. The group of around 10 migrants attempted to hack down the door to the building with their machetes, German tabloid Bild reports.

The bouncer said that the asylum seekers attempted to slash him in the neck, but he was able to fend them off and get inside where he and three other colleagues held the door closed as the migrants attacked it.

As the migrants attempted to chop the wooden door with their machetes, a splinter shot out into the eye of a 25-year-old guest who then had to attend the emergency room.

“I fended off the blow with my forearm and pushed it back. It fell against the other, who had also pulled a machete. We used the seconds to retreat and shut the door. They then hacked on the door. They had apparently planned to take revenge. Otherwise, they would not have brought the weapons,” the bouncer said.

Frank Seifert, who runs the disco, said of the attack: “Two of them had been banned two weeks ago because they had climbed over the fence. We have nothing against asylum seekers, but whoever does not behave cannot go in.”

Due to the prices at the club, which offers a glass of liquor for just one euro after admission, the club, only 20 minutes away from Berlin, gets many guests including migrants.

Similar incidents have taken place in Germany since 2015. In the town of Plauen, asylum seekers were banned from a local disco after several violent incidents and sex attacks on young girls.

Problems with sex attacks became so bad in Hamburg that an experienced bouncer remarked in 2016 that women were afraid to go out alone at night.