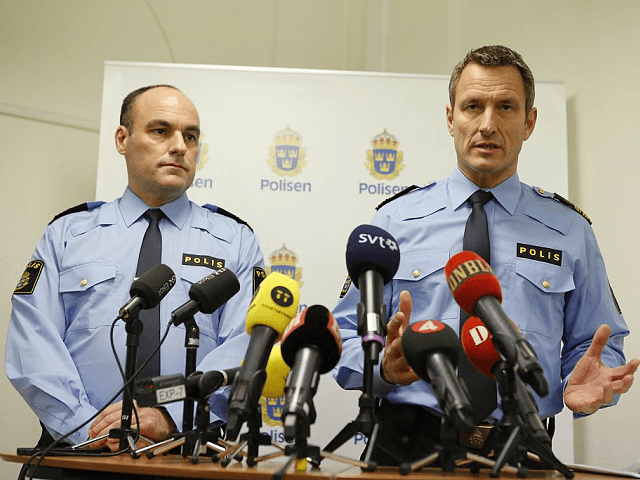 The chief of Sweden’s National Border Police has sounded the alarm on the ability of his force to do its job — even to the low standard required by the European Union under its Schengen zone open borders agreement.

Former Europol top cop and Swedish police superintendent Patrik Engström [pictured above, left] made the warning when he said the Border Police that he commands did not have enough resources to adequately patrol the 102 border crossings and ports nationwide. A Swedish newspaper has claimed the nation is short of 500 border officers to do the job adequately, but Engström declined to discuss specific numbers, Sweden Radio reports.

Engström said: “…the border police’s mission is not resourced to meet Schengen’s requirements for border control… It is a work that is carried out in all seven regions of the police. What is needed, without entering the exact number, is more staff to be able to carry out the external border control that the EU requires. It is about being able to conduct control at both large and small border crossing points.”

The European Union’s Schengen zone is a collection of 26 states which engage in no border control between each other, but maintain external borders with other nations. Sweden only had a border with one non-Schengen nation, Finland.

The officer’s comments come months after an explosive leaked European Union report lifted the lid on the extent of disarray in Sweden’s border control apparatus. The paper, which it is alleged was hushed up in the run-up to the 2018 national elections in which immigration and border control were key issues for the electorate, claimed Sweden has the worst border control of any nation in the Schengen zone, and that “there is no actual border control.”

Faults including border agents receiving only very basic training, not being told how to spot forged documents, and not checking for jihadist fighters travelling to the nation were highlighted in the document.

The officer said in an interview that he had narrowed the problems being faced by the country’s border police down to five main areas, and believed it would take around five years to fix.

The Schengen open borders zone is one of the most prized achievements of the European Union, and a key milestone on its journey to becoming a superstate in its own right. Yet the impact of this has been seriously undermined since 2016, when several member states unilaterally suspended their open borders in reaction to the migrant crisis. In 2019, five EU nations are still maintaining these restrictions, including Sweden and Germany.