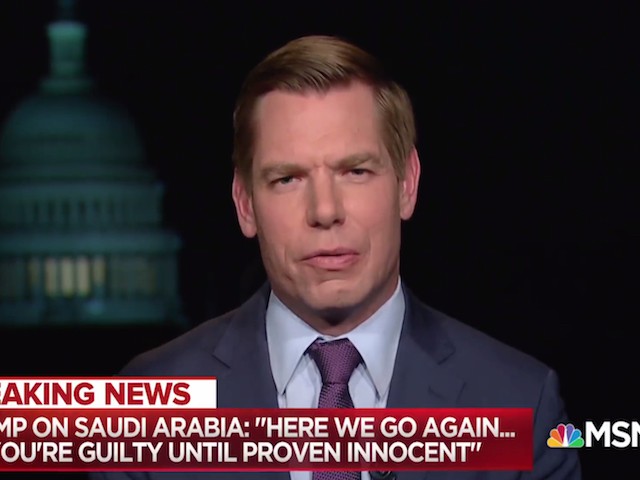 BLITZER: You saw this very strong article, the incoming chairman, we expect, Adam Schiff, of the Intelligence Committee, he just wrote it, posted in The Washington Post. ‘Matthew Whitaker, we’re watching you.’ Very strong words. You’ve got a strong tweet that you posted today, as well. Let me read it to our viewers: ‘The days of presidential immunity are OVER.’ Over, all caps. ‘Gone. No more free passes to cash in on the — on access to Oval Office. No more colluding with Russia, and we’ll see if you’re a tax cheat. America is putting a balance of power on your abuses of power. Welcome to democracy.’ So tell us exactly what you mean by that, including your reference to a balance of power.

SWALWELL: And first, Wolf, happy Veterans Day to our veterans out there. That was a response to the president’s tweet, blaming a dip in the stock market today on what he calls presidential harassment. And what he may be viewing as harassment is probably a response to the two years of immunity that he’s been receiving and what he now sees is going to be oversight. And while we’re going to prioritize, you know, the economy and lifting up, you know, wages and protecting health care, we’re also no longer going to let the president get away with, you know, easing sanctions on Chinese companies while he gets a $500 million loan from the Chinese and a Trump Tower project. We’re not going to allow the president to just, you know, kill this Russia investigation by hiring an assassin like Matt Whitaker to come in and take it out —

BLITZER: When you say assassin, what do you mean?

SWALWELL: Yes, well, he— Whitaker was hired because of his views on the investigation, those views. He’s prejudged the investigation. Vox has reported that the president and Whitaker have been plotting, essentially, to have Whitaker come in and wind down the investigation. If that had happened on Monday, you know, last Monday before the election, we would be powerless. But the voters want a check on these abuses of power. We’re not powerless any more.

BLITZER: So how are you going to divide up between what your Judiciary Committee is going to do in going after the president and the Intelligence Committee?

SWALWELL: Well, we’re not going to chase every ball that the president throws. We’re going to prioritize what matters to our democracy and people in their everyday lives. And so first we want to make sure that no one is above the law. And so seek to protect Bob Mueller, by insisting that we have protect Mueller legislation.

BLITZER: But you need Republicans, too.

SWALWELL: Well, the Republicans have not been able to get a budget passed in the last two years with their own votes, despite controlling the House and the Senate. So if they want Democratic votes, we’re saying they’re going to need to ensure that the Mueller investigation —

BLITZER: So is that an absolute? You’re not going to vote for must-pass legislation to keep the government open unless you have that kind of inclusion?

SWALWELL: Again, they control government. So if they can sort it amongst themselves, they can pass it. But if they want Democrats at the table to work with them, we think that the rule of law is paramount in our country and we’re going to insist on that.

BLITZER: It’s interesting. We spotted mike Michael Cohen, the president’s former lawyer and fixer — he spent a decade working closely with Donald Trump. He’s been in Washington today; he’s just left. We’ve got some video of him arriving at Union Station here in Washington. Here he’s departing in late afternoon. We don’t know what he was doing here. But his criminal defense attorney was with him, and we know that it follows that big explosive story in the Wall Street Journal the other day about the president’s — President Trump’s involvement in hush-money payments to two women. What’s your understanding?

SWALWELL: I hope he’s coming clean. There’s reporting that he’s been talking to the special counsel. The special counsel has had a number of witnesses before the grand jury. It looks like they’re moving toward, you know, more progress in indictments. But Mr. Cohen knows more beyond just campaign finance violations. I was a part of the interview of Mr. Cohen. He was negotiating with the Trump Tower property to go into Moscow during the primary when Russian-Americans who were connected to Vladimir Putin were offering to connect Putin and Trump. And they even said, ‘If we do this right, we can engineer this and elect our boy as president.’ So there’s a lot of concerns about, you know, what Donald Trump knew about those offers while the Russians were interfering.

BLITZER: And I just want to be precise. We spotted Michael Cohen here in Washington today for several hours with his criminal defense attorney. We also noticed that there were eight of Robert Mueller’s attorneys working on this federal holiday, Veterans Day, today. We don’t know what Michael Cohen was doing. We can surmise; we can guess.

SWALWELL: Could have been at the mall. Just picking up —

BLITZER: I suspect — I don’t suspect he was at the mall. If he would have been, maybe would have come with his family, as opposed to his lawyer. But do you believe that the hush-money payments are potentially impeachable offenses?

You know, I think we have to be careful that we don’t, you know, go too far on what is an impeachable offense. And that whatever we investigate, you know, that we have impenetrable evidence and we seek to have bipartisan support. Because we don’t want to be as reckless with the truth as the president is.

BLITZER: You expect indictments this week?

SWALWELL: I think, because of the number of people Bob Mueller has interviewed and that he took a pause for the midterm elections and now we’re a week after the midterms, it wouldn’t surprise me one bit.

SWALWELL: I’ve seen it already in the Senate. The Senate Judiciary Committee passed legislation to protect Bob Mueller. Mitch McConnell absolutely refuses to bring it to a vote. I hope, if we can pass that in the House, it will build momentum over there in the Senate.