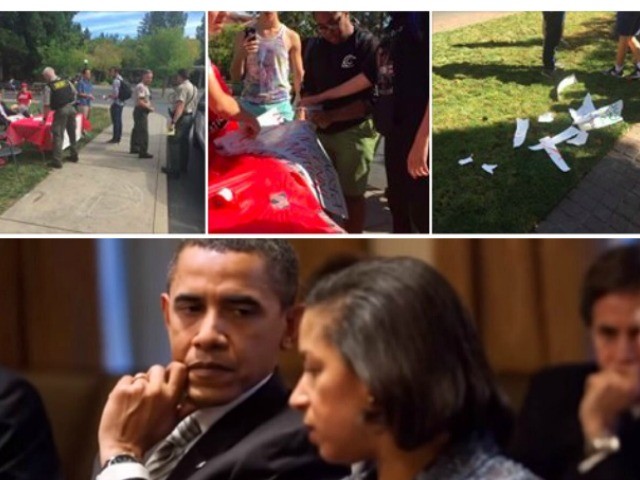 Stanford College Republicans said Tuesday that John David Rice-Cameron, its president and son of former Obama National Security Adviser Susan Rice, was assaulted that day at a event at Stanford University, where he is a sophomore.

“Today, SCR experienced the violent and totalitarian behavior of the unhinged Stanford left. During a ‘Change My Mind’ tabling event regarding the presumption of innocence and the Brett Kavanaugh confirmation, SCR’s President was assaulted by Melinda Hernandez. A sophomore at Stanford, Hernandez approached our President, hit him in chest and forcefully pushed him back,” the group posted on Facebook.

“Our President is pressing full charges against Hernandez. Violence is completely unacceptable, and we will not allow anyone to get away with it. Throughout the day, our signs were vandalized and destroyed, and we will be posting more video and photos shortly. Stay tuned,” it said.

The group posted pictures, including of sheriff’s deputies on the scene and a torn up poster.

Later, the group posted video of three students attempting to vandalize the table the Stanford College Republicans had set up.

“In addition to having our President assaulted by the violent and unhinged Melinda Hernandez, SCR members were harassed at yesterday’s ‘Change My Mind’ table throughout the day. Leftists vandalized and destroyed our signs, threw paint and water at our members, and hurled insults and profanities for hours. This is the state of poltical discourse at Stanford University: defined by the violent and childlish antics of the unhinged left.”

The event mirrored others in Washington during Justice Brett Kavanaugh’s confirmation process. Liberals swarmed the Capitol, protesting inside Senate buildings and on the steps of the Supreme Court.

One viral video showed two young liberals harassing an elderly pro-Kavanaugh protester, who was holding up signs silently. At one point, one of of the young liberals hit and appeared to damage his signs.

Look at these tolerant, progressive protesters dancing around this lone, 71 year old Trump supporter – they eventually try and rip his signs up but are stopped by organizers. pic.twitter.com/X8evmEzmzx