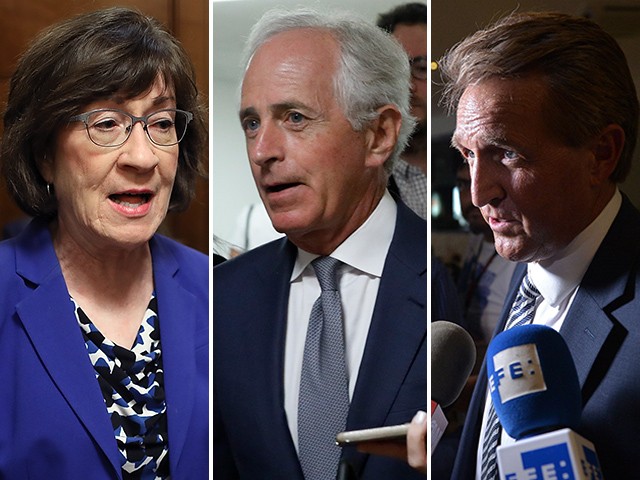 “I hope that Dr. Ford will reconsider and testify before the Senate Judiciary Committee on Monday,” Collins wrote on her Twitter account. “It is my understanding that the Committee has offered to hold either a public or a private session, whichever would make her more comfortable.”

I hope that Dr. Ford will reconsider and testify before the Senate Judiciary Committee on Monday. It is my understanding that the Committee has offered to hold either a public or a private session, whichever would make her more comfortable.

Ford’s attorney Debra Katz said Tuesday night that her client will not testify before the Judiciary Committee until the FBI completes an investigation into her allegation that Kavanaugh pinned her down on a bed during a drunken party when the now-judge was 17 years old. However, the Bureau has said on multiple occasions to multiple news outlets that it has no jurisdiction and no plans to investigate Ford’s charge.

Breitbart News’ senior legal editor Ken Klukowski reports that the FBI cannot take any action on Ford’s claims unless President Trump expressly orders them to do so:

“It is important to remember that an FBI background investigation is entirely different from an FBI criminal investigation,” a former federal prosecutor told Breitbart News. “The letter referred by Feinstein has already been added to Kavanaugh’s file, so the normal background element is complete.”

“What Ford is now asking for with a full investigation would be a criminal investigation,” the prosecutor continued. “The FBI does not do that when there is no federal crime being alleged.”

Another source explains that the purpose of an FBI background investigation is to allow people to provide information in a strictly confidential manner, including secret accusations. Because Ford is making her accusations publicly, there is no role whatsoever for the FBI to play in collecting anonymous or confidential information.

The only way the FBI would get involved is if President Trump took the extraordinary action of ordering the FBI to do so. But that creates a no-win situation because then the president’s opponents who are currently attacking Kavanaugh could accuse the White House of political interference with a law enforcement investigation, directing an agency to act outside its jurisdiction. Some could even call a presidential order for the FBI to investigate a state-law matter to be an abuse of power.

In spite of these facts, Democratic pundits and lawmakers continue to demand an FBI investigation into Kavanaugh’s high school conduct.

Collins, long known for being a more liberal Republican, has faced pressure from far-left activists to vote against Kavanaugh’s confirmation to the Supreme Court. However, this latest statement echoes calls from Never-Trump senators Jeff Flake (R-AZ) and Bob Corker (R-TN) urging Ford to take advantage of the opportunities to testify provided by committee chairman Sen. Chuck Grassley (R-IA).

“I now implore Dr. Ford to accept the invitation for Monday, in a public or private setting,” Flake tweeted Wednesday. “The committee should hear her voice.”

When Dr. Ford came forward, I said that her voice should be heard and asked the Judiciary Committee to delay its vote on Judge Kavanaugh. It did so. I now implore Dr. Ford to accept the invitation for Monday, in a public or private setting. The committee should hear her voice.

Corker went farther, framing the delayed Monday hearing as a final deadline. “If we don’t hear from both sides on Monday, let’s vote,” he wrote.

After learning of the allegation, Chairman @ChuckGrassley took immediate action to ensure both Dr. Ford and Judge Kavanaugh have the opportunity to be heard, in public or private. Republicans extended a hand in good faith. If we don’t hear from both sides on Monday, let’s vote.