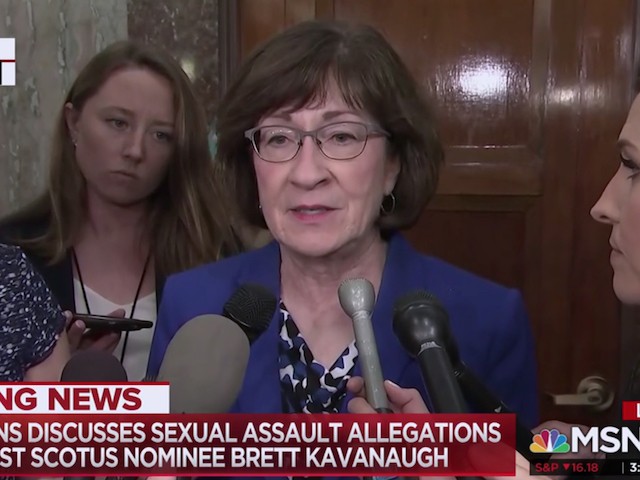 Monday, Sen. Susan Collins (R-ME) said both Supreme Court nominee Brett Kavanaugh and Professor Christine Blasey Ford, who had accused him of sexual assault when they were teenagers, must testify under oath before the Senate Judiciary Committee.

Collins said, “I have said that I believe in order for me to assess the credibility of these allegations that I want to have both individuals come before the Senate Judiciary Committee and testify under oath.”

When asked about the allegations having taken place over 30 years ago, she continued, “That does make it very difficult, and that’s why it’s important that there be a very thorough interview and that we see both individuals respond to the allegations. There are an awful lot of questions, inconsistencies, gaps and that’s why, to be fair to both, we need to know what happened. It’s my understanding that the staff is doing interviews or has proposed to do interviews and that would be the prelude to some sort of hearing.”

She continued, “I don’t know enough about Dr. Ford and her allegations to give kind of judgment. That’s why having the opportunity to observe her being questioned, read a transcript or—and a deposition and make that kind of assessment is so important. Obviously, if Judge Kavanaugh has lied about what happened, that would be disqualifying.”