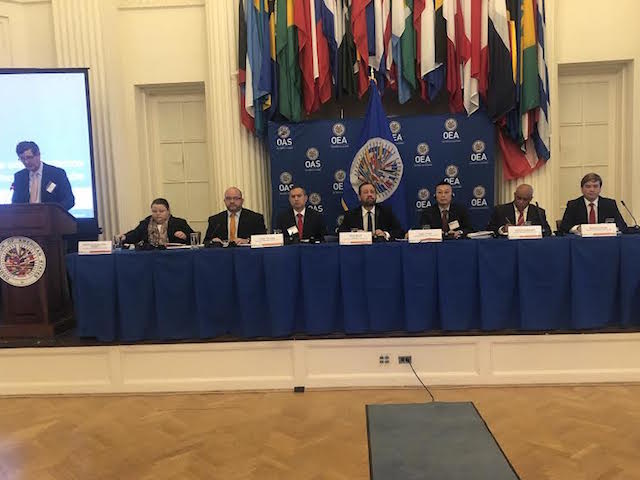 The practice of starving detainees and limiting their access to water remains “a systematic and official practice,” Luis Zúñiga, a former political prisoner, declared during an event on human rights in Cuba hosted by the Organization of American States (OAS).

“You go today and ask a political prisoner who has just left jail what system of feeding he was subjected to and what he is going to say is a regimen of hunger, thirst, and malnutrition,” he added.

Echoing Zúñiga, Paulo Abrao, the chief of the Inter-American Commission on Human Rights (IACHR) at OAS, noted that human rights abuses against political prisoners and the population as a whole “persist” in Cuba.

The Cuban regime’s practice of “harassment, threats, arbitrary detentions, detentions for the exit of the country, deportations, and the criminalization of freedom of expression, and human rights abuses” continue unabated, Abrao said, adding, “We can affirm that systematic abuse persists.”

During the event at OAS headquarters, the Justice Cuba international commission presented testimony from former political prisoners who have witnessed the torture and atrocities at the hands of the Cuban government first-hand.

The commission has compiled legal evidence against the Castro regime’s most prominent officials to bring them to justice at an appropriate tribunal.

Pedro Corzo, a former political prisoner and one of the investigators who assisted Justice Cuba in amassing evidence against the communist government, revealed that the regime has detained “over half a million people for political reasons” since it came to power nearly 60 years ago.

He noted that the communist government has also carried out “massive raids in which individuals are apprehended for their sexual orientation, for liking foreign music … and having long hair.”

It is likely that “political prisons in Cuba are responsible for the only cases in the world where there are prisoners who have died of malnutrition without going on a hunger strike, just by eating the food they gave them,” he proclaimed.

Zúñiga also noted that prisoners are subjected to “a permanent system of arbitrary beatings.”

“They are hit without reason and justification. In many cases, when the regime received adverse actions by the United Nations or the international community … the Cuban government immediately took revenge against the political prisoners with arbitrary beatings,” he said.

“I have a fractured cranium from one of those beatings,” Zúñiga continued.

Currently, there are between 150 and 180 political prisoners in Cuba, excluding those beaten and detained on a weekly basis for publicly expressing disapproval of the Castro regime.

On Friday, the OAS hosted an unprecedented day-long event offering an international platform to the victims of crimes against humanity and their families at the hands of the Cuban communist regime.

During the event, Justice Cuba announced that it had completed the investigation phase of its efforts to compile legal evidence against the Castro regime, noting that it is currently in search of a tribunal that can successfully try Cuban government officials accused of torture and other atrocities against the opposition.

Some U.S. lawmakers of Cuban descent have expressed support for indicting members of the Castro regime.

“In the spirit of Cuban Independence Day, we urge you to consider new, additional actions to hold the Castro regime accountable for its crimes,” the Cuban-American lawmakers wrote in a statement. “For that reason, within all applicable rules and regulations, we urge you to direct the Department of Justice to review whether Raúl Castro should be indicted for the illegal and heinous act of shooting down in international waters two American civilian aircraft flown by Brothers to the Rescue on February 24, 1996.”