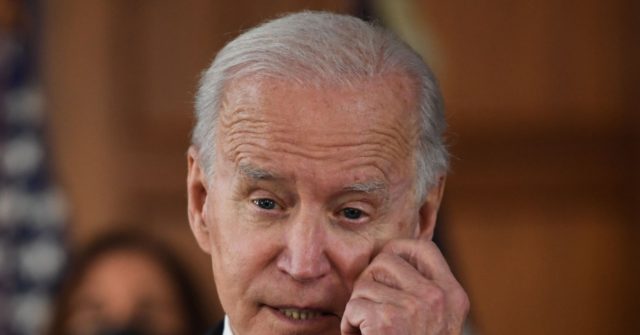 President Joe Biden’s job approval rating has slipped three points since Friday as Democrats in the House continue to pursue a range of far-left policy proposals, including the Equality Act, H.R. 1, and mass amnesty.

“The latest figures include 32% who Strongly Approve of the job Biden is doing and 42% who Strongly Disapprove. This gives him a Presidential Approval Index rating of -10,” Rasmussen reported.

Monday’s figures represent a three-point drop, as Biden’s approval stood at 52 percent on Friday, March 18. His “strongly disapprove” ticked up two points since Friday, rising from 40 percent to 42 percent, and his “strongly approve” dipped one point, dropping from 33 percent to 32 percent.

The dip comes as the Democrat-led House and Senate continue to pursue a range of radical progressive policies in the early months of Biden’s presidency, including mass amnesty.

Last week, the House passed the “Dream and Promise Act” and the “Farm Workforce Modernization Act.”

As Breitbart News reported, the “Dream and Promise Act” would “grant amnesty to several million illegal immigrants that allegedly were brought to the United States as children by their illegal immigrant parents” and cost an estimated $35 billion over the next decade, according to the Congressional Budget Office’s (CBO) analysis.