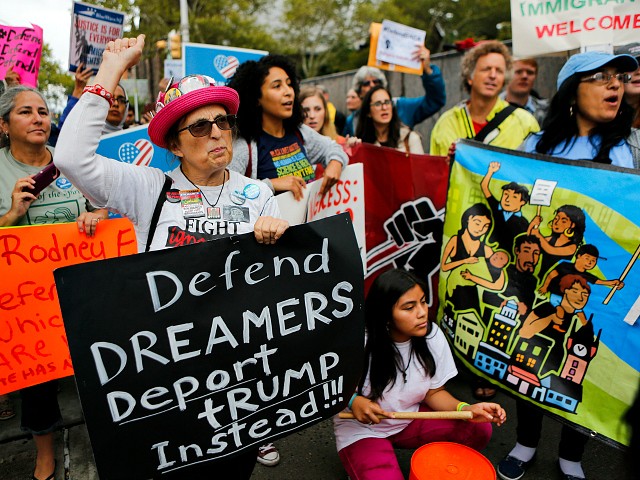 WASHINGTON, DC — The Supreme Court could announce as early as Friday that it will hear arguments on whether President Donald Trump has the legal authority to end DACA.

President Barack Obama created the Deferred Action for Childhood Arrivals (DACA) amnesty program for illegal aliens in 2012. In 2014, Obama expanded DACA into DAPA (Deferred Action for Parents of Americans). In 2015, the Fifth Circuit federal appeals court struck down DAPA as illegal, and then the Supreme Court deadlocked 4-4 on the issue after Justice Antonin Scalia passed away in February 2016.

Shortly after President Donald Trump took office, the Justice Department determined that DACA is illegal for the same reasons the courts struck down DAPA. The Department of Homeland Security accordingly announced that it would end DACA.

Liberal opponents of the move sued, arguing that the Trump administration must go through the lengthy requirements of the Administrative Procedure Act (APA) before ending DACA.

Plaintiffs filed lawsuits in three liberal federal district courts, predictably winning their challenges in all three. Those matters have been pending in the federal appeals courts since that time.

U.S. Solicitor General Noel Francisco, therefore, took the unusual step of petitioning the U.S. Supreme Court to grant certiorari (i.e., to grant review in these cases) before the appellate courts have finished their work. It is extremely rare for the justices to grant “certiorari before judgment,” but Francisco made the case as to why very special circumstances warrant immediate action by the nation’s highest court.

During the Supreme Court’s weekly closed-door conference this Friday, January 11, the justices will privately vote on whether to “grant cert” now versus waiting until one of the appeals courts renders a decision.

If the Supreme Court grants cert on Friday, the grant will likely be announced Friday afternoon. Should the Court take the case at this time, the justices will hear oral arguments in April and probably hand down their decision in June.

If denied, the denial will likely be included with the full list of orders decided at the conference, which will be released at 9:30 a.m. on Monday, January 14. If the Court denies this week’s petition, it is only a vote against expediting the petition process. The Trump administration can petition again once one of the three appellate courts handling these cases renders a decision.