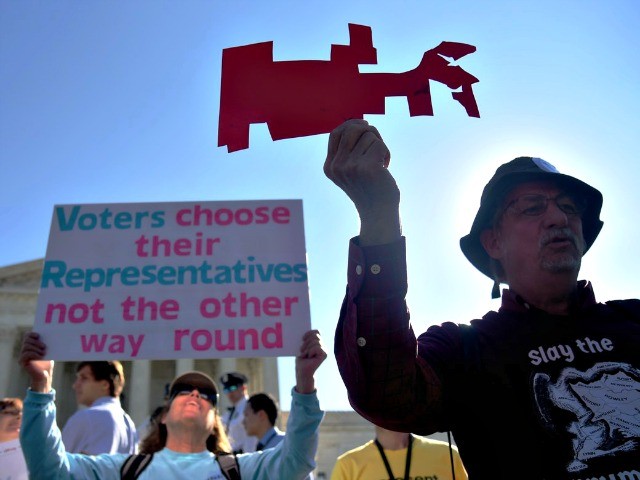 WASHINGTON, DC – The Supreme Court continues to show how much of a difference President Donald Trump’s appointing Justice Brett Kavanaugh to replace Justice Anthony Kennedy could have, as the Court now tackles political gerrymanders, possibly ending a decades-long constitutional debate over whether courts can somehow take political calculations out of political redistricting.

The Constitution requires the federal government to conduct a nationwide census once per decade. The Court further requires that every ten years, seats in the U.S. House of Representatives must be reapportioned among the states in response to what the census revealed about population changes among the states.

Many people are surprised to learn that the Constitution does not specify that states must also draw congressional district lines according to population. In earlier years, they could have been elected statewide as a slate.

However, in the 1960s the Supreme Court held that the Equal Protection Clause of the Fourteenth Amendment – which was ratified in 1868 – require the principle of one-man, one-vote. That means that within each state, every U.S. House district must have precisely the same number of persons, and state legislative districts must require equal populations as well.

There is an ongoing debate about whether that rule in the Constitution requires an equal number of human beings, versus an equal number of citizens, or an equal number of voting-age citizens. The Supreme Court in its 2016 case Evenwell v. Abbott said it would wait to rule on that question until some state attempted to redistrict on the base of citizenship, and it is one of the reasons many people want to see the 2020 census ask each person counted in the census whether he or she is a citizen, giving each state the option of using those numbers for redistricting for 2022.

The Constitution also forbids “racial gerrymanders,” which is the term for drawing oddly shaped districts – the term refers to a district that looks like a salamander – because those can be used to disenfranchise racial minorities. The Fourteenth and Fifteenth Amendments were designed to end racial discrimination, especially with regards to voting.

A related issue that has been debated for decades is the role of courts in challenging “political gerrymanders,” meaning gerrymanders where state politicians are drawing lines for reasons that are “too political.”

Conservatives have always been skeptical of the idea that federal judges can ever “take the politics out of politics.” In other words, conservatives believe that drawing legislative lines within each state is an inherently political act and thus that politics can never be removed from the equation.

Justice Antonin Scalia wrote in 2004 that he believed such questions are nonjusticiable under the political-question doctrine, meaning that federal judges are unable to decide such matters, and must instead leave them to voters at the ballot box.

Kennedy was never willing to close the door on judicial involvement in political gerrymanders, however, so the courts for years have gone back and forth with different legal theories about how judges can decide these legal challenges.

But in October 2018, Kavanaugh replaced Kennedy. Legal experts have been wondering if this change amounts to a fundamental shift in the thinking of the Court on this issue, and whether the votes may now exist for Scalia’s view to prevail.

We might not have to wait long. The Supreme Court on Friday decided to take up two political gerrymander cases, one involving North Carolina and the other involving Maryland. There are multiple issues in the case, including whether the plaintiffs have standing to bring these suits into federal court at all.

The Court has ordered these cases to be argued in March. A decision is expected by the end of June.