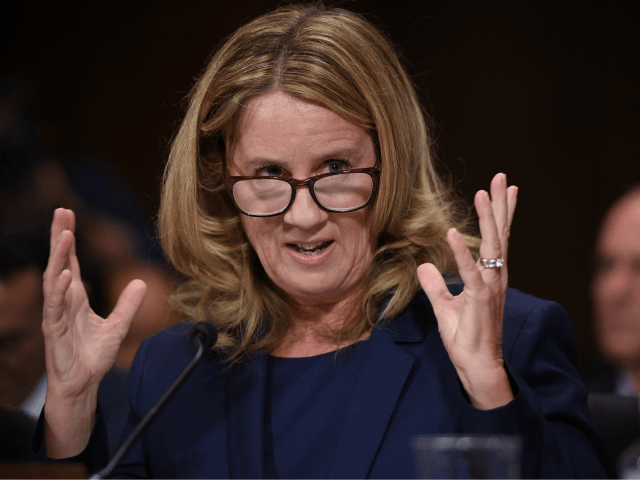 Ford was asked about the funds at a hearing on Thursday before the Senate Judiciary Committee when the GOP-selected sexual assault prosecutor questioned Ford, who claims that Supreme Court nominee Brett Kavanaugh groped her at a high school party in the early 1980s.

“I’m aware that there’s been several GoFundMe sites,” Blasey Ford told Rachel Mitchell. “I haven’t had a chance to figure out how to manage those because I’ve never had one.”

Much of her expenses will be legal costs that will compensate her attorney, Debra Katz, a left-wing activist who defended Bill Clinton and maligned his accuser, Paula Jones. She also came to the defense of disgraced former Sen. Al Franken (D-MN), whom several women accused of sexual misconduct.

The GoFundMe campaign shared other campaigns that are raising money for Ford on the site:

https://www.gofundme.com/make-justice-rainn:
This campaign was inspired by these current events, and funds are going directly to the 501(c)3 Certified Charity Rape Abuse and Incest National Network (RAINN).

https://www.gofundme.com/honor-dr-blasey-as-an-educator:
Heidi, who ran the other large campaign for Dr. Blasey, is now raising funds to create a scholarship in Dr. Blasey’s name.

https://www.gofundme.com/timesup:
Time’s Up Legal Defense Fund connects those who experience sexual harassment, abuse, or related retaliation in the workplace or are trying to advance their careers with legal and public relations assistance.

CNBC reported on the fundraising campaigns:

GoFundMe, a crowdfunding website that allows anyone to start a fundraising effort, is hosting 13 campaigns related to Blasey Ford, according to a search on the site using her name. Most of them haven’t gotten much response, though they picked up after the topic was raised.

One of the GoFundMe pages mentioning Blasey Ford was for a campaign, called “We Believe Women,” which raised over $46,000 to take out a full-page newspaper ad.

Members are set to vote Kavanaugh’s nomination out of committee on Friday ahead of a full Senate vote.