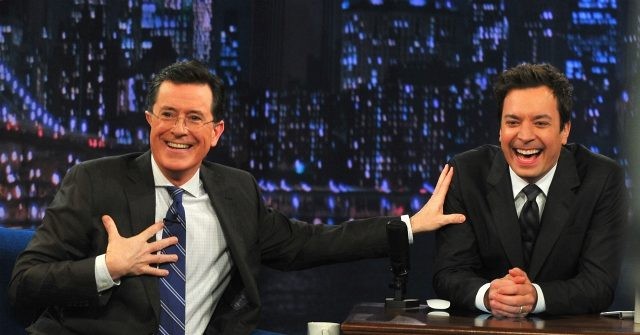 Left-wing late-night hosts Stephen Colbert and Jimmy Fallon have targeted President Donald Trump in their jokes 97 percent of the time over his Democratic rival Joe Biden, according to a new study from the Center for Media and Public Affairs at George Mason University.

The study found that NBC’s Fallon and and CBS’s Colbert told 455 jokes about Trump and 64 jokes about his family and the workings of his administration. Meanwhile, the pair cracked just 14 jokes about Biden, despite the 77-year-old also being a ripe target for humor, from his almost daily gaffes and brain freezes.

“When Trump’s onstage, everyone else is blacked out,” Robert Lichter, a communications professor at George Mason, told the AP. “I think they will find a way to keep making jokes about Trump, even after he leaves office.”

Researchers found that although late-night hosts typically target Republicans more than Democrats, the difference has never been so stark. During the 2016 presidential election, Trump was the target of around 78 percent of the jokes, compared to Hillary Clinton on 28 percent.

Fallon used to attempt to portray himself as more of a neutral political actor, although he appears to have all have given up on that image over the past few years, throwing his weight behind numerous left-wing causes.

Colbert, meanwhile, has never made any secret of his Democratic Party leanings and his disdain for Trump. Earlier this year Colbert described Trump as a “monster” over his response to the Chinese coronavirus pandemic.

On Monday, Colbert even hosted a fundraiser with Sen. Kamala Harris in aid of the Biden Victory Fund, where the pair discussed the “importance of this election, clean energy, and the plan to build back better.” Tickets for the virtual event topped out at a staggering $100,000.

Although no such figures were provided for other late-night comedians such as Seth Meyers, Jimmy Kimmel, Samantha Bee, and Conan O’Brien, all of them similarly disdain the president and use their platform to lampoon him on nightly basis.