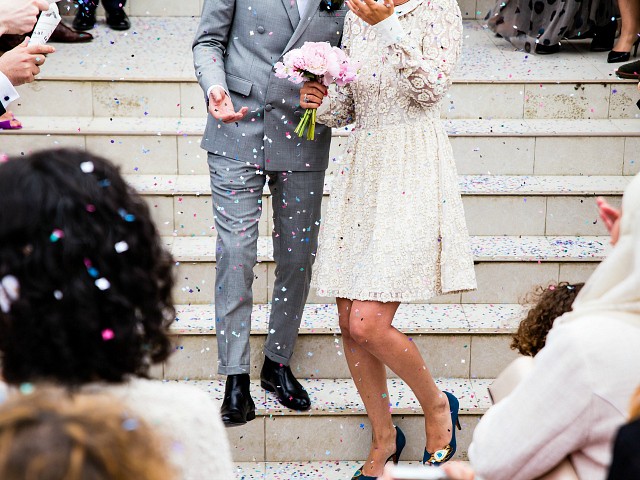 The study defines “working class” as those with at least a high school diploma but less than a four-year college degree, living in households between the 20th and 50th income percentiles — roughly $30,000 to $69,000 a year for a household with two adults and one child.

“Slumping marriage rates” are listed as a “growing problem” among the “working class” in the study’s executive summary, alongside declining labor force participation, single-parent childrearing, and opioid deaths:

In 1980, “working class” persons were nearly as likely to be married as top earners — the rates being 74 and 79 percent, respectively. “[In recent years], the erosion of marriage was most pronounced in the working class,” states the study.

The study echoes some of the findings of Charles Murray’s sociological analysis in Coming Apart: The State of White America, 1960-2010:

In the 1970s, most working-class men and women were stably married, defined as living in their first marriage. Today, a majority of working-class adults ages 18–55 are not married at all, let alone in stable marriages. Moreover, only about half of children raised in working-class homes will be raised into adolescence by stably married parents. By contrast, almost three-quarters of children raised in college-educated and affluent homes will be raised by their own married parents as they reach adolescence. … Over the last four decades, the working class has come to look less like the middle class and more like the poor—struggling families, crumbling communities and, most recently, opioid addiction …  plight of the working class—restoring the culture of family and revitalizing civic institutions

Marriage is positively correlated with financial stability. Conversely, single parenthood greatly increased the likelihood of poverty within a family: “The poverty rate among single mothers with children tends to be about five times as high as the rate among married couples.”

In 2016, for example, the poverty rate among families headed by single mothers was nearly 41 percent, while the poverty rate among families headed by married couples was less than nine percent. It follows that as more and more working-class parents fail to form or maintain two-parent families, the poverty rate inevitably rises. In addition, most researchers observe, married-couple families provide a better childrearing environment than single-parent families, so an increase in the share of any group that is headed by single parents could have a troubling impact on the prospects for their children in the next generation.

Among children one year of age or younger living with at least one parent in 2015, over a third (36 percent), in “working class” households were born outside of marriage.

The role of faith in working-class families is well-documented. As Robert Jones, the CEO of the polling firm PPRI, has explained it, “Churches have served, for most of the nation’s life, as pipelines to all kinds of civic engagement—and not just because they hand out voter-registration cards or have them in the lobby. We actually see a link between all kinds of civic activity and church activity.” Yet, participation in this once-central institution has declined greatly, with weekly church attendance falling from 40 percent in the 1970s to 28 percent in the 2000s among those with a high school degree or some college.

Civil society is in broad decline among the “working class,” notes the study:

Civic institutions that once sustained blue-collar enclaves—churches, union halls, neighbor hood associations, the local VFW or Lions Club—are closing their doors or moving elsewhere. And as the social fabric frays, a host of new problems are arising, from opioid addiction to what Anne Case and Angus Deaton have called “deaths of despair” caused by drugs, alcohol or suicide and correlated with distress and social dysfunction.

The Aspen Institute’s Bruce Reed, one of the study’s directors, said in a December interview with C-SPAN:

The social contract has broken down for these folks. They get very little help from the safety net. Those at the upper end of the income bracket get lots of tax breaks. Those at the bottoms gets lots of help that they need. Working folks don’t get so much, and their fortunes have been falling as wages have stayed flat for a generation.

Everybody recognized — particularly  in the wake of the election, in the wake of Brexit — that this was a cry for help from people who desperately needed it, and that the political fights that Washington has hadn’t been working for them.

Our view is, the way the future of work is going, the economic forces that are putting pressure on the wages of ordinary folks — global competition, automation, innovation — are coming for everyone else, and that the working class is really just a a canary in the coal mine for the rest of us.

Opportunity America’s Tamar Jacoby, another of the study’s directors, said in a December interview with C-SPAN, “Right now, 75 percent of investment capital goes in three states: California, New York, and Massachusetts. Ohio, Pennsylvania, Louisiana, Idaho, they don’t get investment. … Can we get some of that investment out to other places? No wonder things are feeling rotten in those other places.”