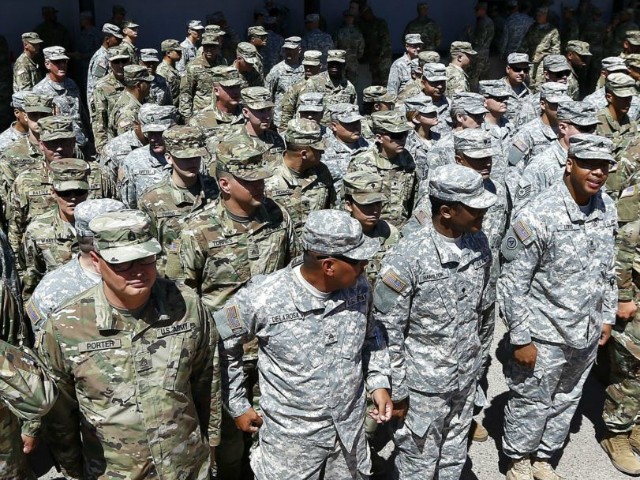 The American military’s superiority “has eroded to a dangerous degree,” and U.S. ability to win a war against adversaries like China and Russia “is increasingly in doubt,” a bipartisan report commissioned by Congress to evaluate U.S. President Donald Trump’s defense strategy revealed on Wednesday, echoing other assessments.

“U.S. military superiority is no longer assured and the implications for American interests and American security are severe,” the National Defense Strategy Commission determined after reviewing classified documents, receiving Pentagon briefings, and interviewing top officials from the U.S. Department of Defense (DOD).

Breitbart News has long documented concerns voiced by independent and U.S. military analysts that budget cuts and policy decisions have decimated the U.S. military — particularly when it comes to manpower, equipment, and, most importantly, readiness.

Consistent with those analyses, Wednesday’s report found that the U.S. is facing a “crisis of national security,” especially if faced with a multi-front conflict, adding:

The security and well being of the United States are at greater risk than at any time in decades. America’s military superiority—the hard-power backbone of its global influence and national security—has eroded to a dangerous degree…America’s ability to defend its allies, its partners, and its own vital interests is increasingly in doubt. If the nation does not act promptly to remedy these circumstances, the consequences will be grave and lasting.

The U.S. military could suffer unacceptably high casualties and loss of major capital assets in its next conflict. It might struggle to win, or perhaps lose, a war against China or Russia. The United States is particularly at risk of being overwhelmed should its military be forced to fight on two or more fronts simultaneously.

In February of last year, Gen. Daniel Allyn, vice chief of staff of the Army, sounded the alarm declaring that only three (about five percent) of the 58 U.S. Army Brigade Combat Teams (BCTs) are capable of immediately joining the fight in the event of a major conflict.

Echoing other assessments, the analysts attributed the problems facing the U.S. military’s capability and readiness to “political dysfunction,” the effects of the bipartisan Budget Control Act (BCA) of 2011, also known as sequestration, and years of failing to adopt Pentagon appropriations on time.

Under the BCA, the U.S. substantially slashed defense spending “with pronounced detrimental effects on the size, modernization, and readiness of the military,” the report noted.

“The commission argued that despite a $716 billion American defense budget this year, which is four times the size of China’s and more than 10 times that of Russia, the effort to reshape the U.S. defense establishment to counter current threats is under-resourced,” the Washington Post reported. “It recommended that Congress lift budget caps on defense spending in the next two years that in the past have hobbled the military’s ability to plan for the long term.”

Similar to the findings of Wednesday’s report, the Heritage Foundation’s 2019 Index of U.S. Military Strength determined that the U.S. military is only “marginally able” to defend America against the current high levels of risk primarily fueled by “formidable” rivals like China and Russia.

“To counter Russia and China, the commission said the Navy should expand its submarine fleet and sealift forces,” the Post revealed, adding that “the Air Force should introduce more reconnaissance platforms and stealth long-range fighters and bombers; and the Army should pursue more armor, long-range precision missiles and air-defense and logistical forces.”

Douglas Loverro, the former U.S. deputy assistant secretary of defense for space policy, cautioned early this year that the Chinese and Russian armed forces had eclipsed their American counterparts in developing some significant war-fighting capabilities in space.

Because of our recent focus on counter-terrorism and counterinsurgency, and because our enemies have developed new ways of defeating U.S. forces, America is losing its advantage in key war fighting areas such as power projection, air and missile defense, cyber and space operations, anti-surface and anti-submarine warfare, long-range ground-based fires, and electronic warfare.

Many of the skills necessary to plan for and conduct military operations against capable adversaries—especially China and Russia— have atrophied.

In April 2017, Gen. Gen. John Hyten, the head of the U.S. Strategic Command (STRATCOM), told lawmakers that the U.S. is facing “significant challenges” sustaining its defense capabilities, both in the nuclear and conventional realm, and is at risk of no longer holding a military advantage over its enemies.

The commission “advocated seeing through the modernization of the U.S. nuclear arsenal and putting a top Pentagon official in charge of developing additional air and missile defenses,” the Post pointed out.

Although the commission endorses the aim of Trump’s strategy, it cautioned that the U.S is not moving fast enough or investing enough money to put the president’s vision into practice.

The commission makes 32 recommendations, urging the Pentagon to explain more clearly how it intends to combat major-power rivals.