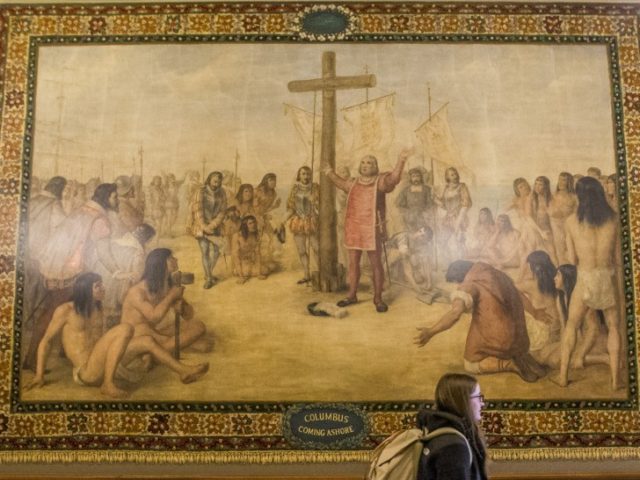 The University of Notre Dame announced recently that it will be covering up an “offensive” mural of Christopher Columbus, sparking debate and conflict amongst the university’s students and alumni.

University of Notre Dame President Rev. John I Jenkins announced in a January 20 letter that the murals of Christopher Columbus would be covered up. Jenkins said that the murals ignore the consequences of Columbus’ voyage to America for Native Americans.

The murals by Luigi Gregori that adorn the ceremonial entrance to Notre Dame’s Main Building depict the life and exploration of Christopher Columbus. Painted in 1882-84, not long after a devastating fire and reconstruction of the Main Building, they reflect the attitudes of the time and were intended as a didactic presentation, responding to cultural challenges for the school’s largely immigrant, Catholic population. In recent years, however, many have come to see the murals as at best blind to the consequences of Columbus’s voyage for the indigenous peoples who inhabited this “new” world and at worst demeaning toward them.

According to a report from The College Fix, the decision has created various factions in the Notre Dame community. Students and alumni are now debating on whether or not covering up the mural is the right move.

The Native American Student Association praised Father Jenkin’s decision in a Facebook post on January 20, writing that the move would increase acknowledgment of the humanity of the Native people who were affected by the founding of America.

The Native American Student Association of Notre Dame is thankful for Father Jenkins’ thoughtful and wise decision. This is a good step towards acknowledging the full humanity of those Native people who have come before us. We sincerely hope that Father Jenkins and his administration will continue to prioritize Native issues on our campus in the coming weeks and months as there is still work to be done.

The Young Americans for Freedom chapter at the University of Notre Dame has a different take on Jenkin’s decision. “Yes, these murals need to be put in context. The Native American part of the story needs to be shared,” the student chairman of the chapter said in a comment.

Two Notre Dame alumni argued that the decision to remove the mural is an insult to “those alumni and alumnae of Italian-American and Spanish-American heritage and members of the Knights of Columbus.”

Stay tuned to Breitbart News for more updates on the mural.