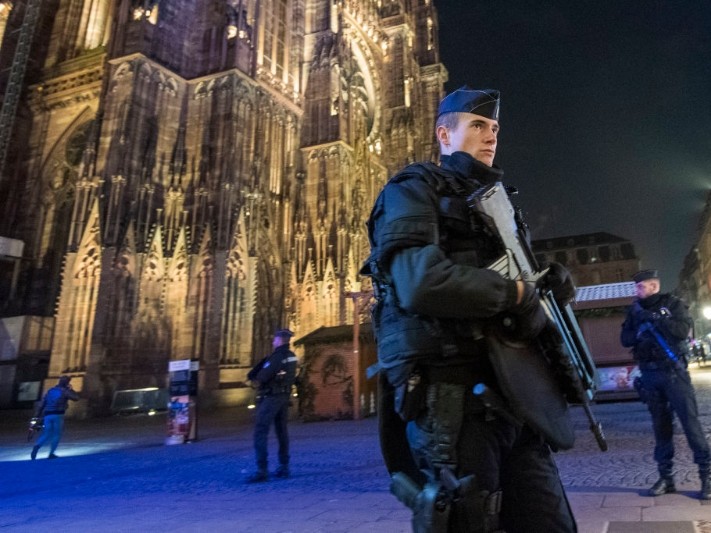 The terrorist who opened fire in Strasbourg killed two, wounded numerous others, and proved once against that even the most stringent gun controls cannot stop a determined attacker.

However, those controls can keep law-abiding citizens from having the ability to defend themselves when an attacker strikes.

Breitbart News reported that the terror suspect, Cherif  C., yelled “Allahu Akbar” during the attack. And French broadcaster BFMTV reported that the 29-year-old suspect, who was born in Strasbourg, has had a total of 27 prior criminal convictions including ones for violent robbery.

There is presently no clear reporting on the gun or guns that were used in the attack. France 24 reports that it was a handgun and the Guardian reports that it was “an automatic rifle.” Either way, between France’s various bans on whole categories of firearms and the in-depth background check process to own the few types of guns that one can legally possess, it is hard to imagine someone with 27 convictions legally acquiring a firearm.

For example, A Review of French Gun Laws (2012) shows that “ownership of fully automatic firearms [is prohibited] for civilians,” so if the gun he possesses was automatic it was illegal, period.

And if the weapon was a semiautomatic it should be noted that to legally acquire such a weapon a person has to have “an active shooting club [membership],” go to the range “at least three times a year, ” and “[see] a doctor every year,” having the doctor declare them “physically and mentally capable of owning a firearm.” Additionally, they have to fill out paperwork and undergo a criminal background check, including third-party references as well.

The University of Sydney’s Gun Policy center describes France’s gun control as “restrictive,” yet that did not prevent the Strasbourg shooting from taking place. The very same laws failed to prevent the November 13, 2015, attack in which 130 were shot and killed and the January 7, 2015, Charlie Hebdo attack where 12 where shot and killed.