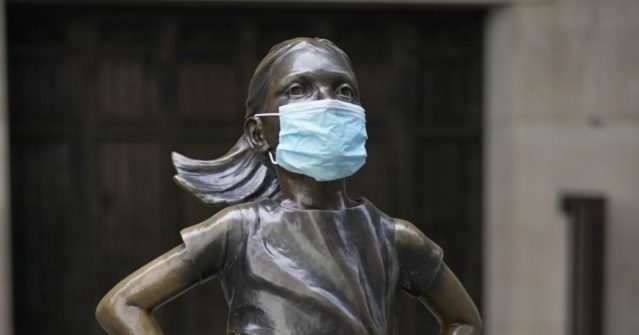 Stocks in the U.S. tumbled lower Thursday amid reports that coronavirus infections were rising in some areas that had tried to reopen the economy and plunging poll numbers for President Donald Trump.

The Dow Jones Industrial Average fell 6.9 percent on Thursday, a decline of more than 1,800 points. The S&P sank almost 6 percent. The Nasdaq Composite fell by 5.27 percent. The small-cap Russell 2000 index dropped by 7.58 percent.

Prior to the sell-off, stocks had been soaring in a frantic rally, with the major index up 40 percent since their March lows. Indications that some states might be seeing a second wave of infections seemed to have popped the bubble of enthusiasm for reopening.

Several polls have showed that President Trump has been losing popularity in recent weeks. His approval ratings have slipped and even the public approval of his handling of the economy, long a strength for the administration, has declined sharply. The possibility of the end of the Trump presidency, which had been a boon to markets and the economy prior to the pandemic, may also have soured investor moods.

Shares of Boeing, which had been rising as a popular bet on a recovering economy, fell 16.4 percent. All 30 stocks on the Dow

All 11 sectors of the S&P fell. The worst sector was energy, which fell 9.45 percent, followed by financials, industrials, and materials. Every single S&P stock but one, the food company Kroger, declined, an indication of how broad the Thursday sell-off was.

(Pictured: Fearless Girl, a bronze sculpture by Kristen Visbalthe, with a PPE mask on in front of the New York Stock Exchange in the Wall Street Financial District of Manhattan New York May 19, 2020.)