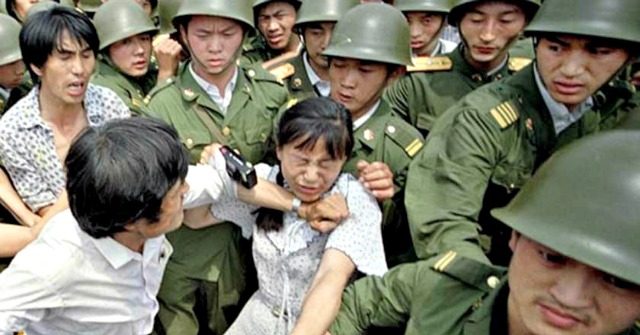 Population Research Institute President Steven Mosher recalled how Chinese authorities emptied Beijing’s hospitals of “dead and wounded” to “destroy the evidence” of what they had done in Tiananmen Square on June 4, 1989. He joined Monday’s edition of SiriusXM’s Breitbart News Tonight with host Rebecca Mansour and special guest host Dylan Gwinn on the eve of the event’s 30th anniversary.

“It began in February of 1989 with students peacefully demonstrating in favor of democracy, human rights, and an end to the one-party dictatorship,” remembered Mosher. “They were holding signs with quotations from Patrick Henry, ‘Give me liberty or give me death.’ They were quoting George Washington and Thomas Jefferson and Abraham Lincoln. … The Chinese people, especially the young people, saw the outside world for the first time because Deng Xiaoping had opened up — had lifted the Bamboo Curtain, as we’d call it — and they had seen what life was like in the outside world. They had tasted freedom. Some of them had been in the United States and had come back, and they desperately wanted change in China.”

Over a million people — from all walks of life — were demonstrating in Beijing in pursuit of “human rights” and “freedom,” said Mosher, adding, “At that point, China came so close to really embarking on the kind of reforms that we saw in Eastern Europe and in the former Soviet Union.”

Mosher stated, “On the day and night of the massacre, [Deng Xiaoping] could not get the army stationed in Beijing to follow his orders, so what they did was bring n the 38th Army from the region of Mongolia with many, many, many Mongolian recruits — not Han Chinese, but Mongols who had no connections to people in the capital, who had often never been to the capital — who were just brought in overnight and were told that there was an armed uprising. They were lied to. They were told there was an armed uprising in Beijing which wanted to overthrow the Chinese Communist Party, and it was their job to put down that uprising.”

Mosher continued, “These were people brought in from the borderlands, people who in many cases didn’t like the Han Chinese. They’re the ones who opened fire. They’re the ones who committed the massacre. There were tanks rolling into crowds of people at high speed, crushing them into literally hamburger. The streets had to be scraped afterwards with bulldozers to get off the remains of the human beings who were killed by these tanks that ran over them. The butchery was horrible.”

“I went immediately after the massacre,” recalled Mosher. “I took a trip around the world. I went to Hong Kong to talk to some of the people, the democratic dissidents who had gotten out on the underground railroad. I went to Taiwan [and] Paris to visit some other people who’d been given political asylum.”

Mosher went on, “There were many, many more people killed in Beijing and other cities than the Chinese government will, and the troops opened fire on unarmed demonstrators who were peacefully asking for change. This is the kind of government [and] political party that we are still dealing with in China today. People need to understand this. These are people who rule by force and the threat of force, and they do not hesitate to kill anybody who gets in their way.”

Mosher added, “The hospitals were overflowing with the dead and wounded. But the next day, the hospitals were emptied out. The wounded were taken out — even those who were on life support who shouldn’t have been disconnected from their IVs — were all taken away in army trucks and never heard from again. They emptied out the hospitals of all the dead and wounded to try to destroy the evidence, and that’s exactly what they did.”

“Communist parties, when they come to power … will kill ten to 15 percent of the population,” stated Mosher. “They’re kill off the counterrevolutionaries, the people who resist their rule. In China, the total is much more than that, because you’ve got the tens of millions who died in the purges of the 50s, the 60s’ Cultural Revolution victims, the victims of all the purges and persecutions since, the 400 million who were killed in the one-child policy, for example, pre-born and born, killed after birth by Red Army doctors. So you’ve got a total number of casualties here of about 500 million, that’s about 30 percent of the Chinese population, that’s why I call it the biggest killing machine in history.”

Technological developments, determined Mosher, have deepened the Chinese government’s degree of control over its subjects.

“I actually think there’s more control now in China than there was in 1989,” concluded Mosher. “There is now, in China, a high-tech digital dictatorship, which uses artificial intelligence, video surveillance cameras, face-recognition technology, DNA, retinal scans, fingerprints, all kinds of big data crunching [and] machine-learning. It means that people in China are under 24-hour surveillance by the state in a way that they weren’t back in 1989. … the Chinese Communist Party is busy turning the entire country into a virtual prison.”