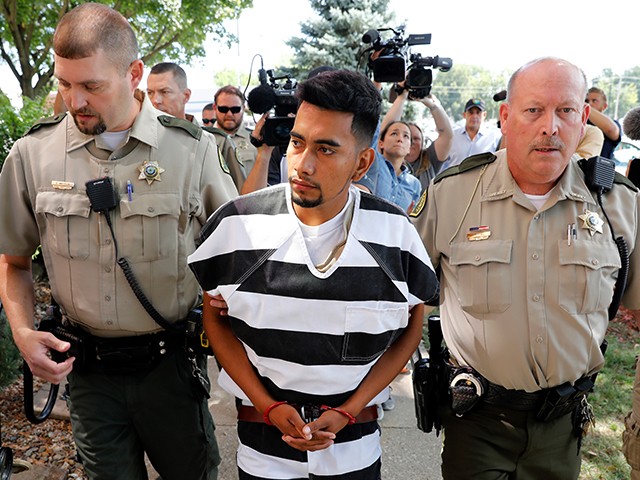 Rep. Steve King (R-IA) says men from the “most violent countries in the world” are “invading” the United States through illegal and legal immigration.

In an interview with an Austrian media outlet, King discussed the death of 20-year-old college student Mollie Tibbetts whose body was found in September in a cornfield in her rural hometown of Brooklyn, Iowa after she was last seen jogging on July 18.

Christian Bahena-Rivera, an illegal alien from Mexico, has been charged with first-degree murder in Tibbetts’ death after police say he admitted to confronting and chasing down the young woman. The illegal alien lived in a region of Iowa that was surrounded by sanctuary cities, as Breitbart News noted, and an initial autopsy report revealed that Bahena-Rivera allegedly stabbed Tibbetts to death.

King said if the U.S. had enforced federal immigration law properly, Bahena-Rivera would have not been in the country to begin with and Tibbetts would still be alive.

If Mollie Tibbetts had carried a 15 ounce gun, it would have been more useful to her than her cell phone. I don’t want to see everybody in the US carrying a gun. It’s not practical, they are heavy, you might only need it once in ten lifetimes. The defense I am really talking about is this: the individual who murdered Mollie Tibbetts should have never been in America. [Emphasis added]

Liberals in the US say that Mollie Tibbetts’ death is just because the perpetrator was male, that it didn’t have anything to do with him being a law breaker, a criminal. And what I say to those people who say that immigration isn’t part of her death is: then go and tell her family, that if her killer had been deported the minute he set foot illegally on US soil, your daughter would still be dead. But they wouldn’t do that because that would contradict their Leftist agenda. We have a sense of morality. They have an agenda. What is missing here from the mindset of the policy makers: they don’t know this data. They don’t want to acknowledge facts that contradict their agenda. [Emphasis added]

King also warned against mass immigration to the U.S. from the most dangerous regions of the world, specifically Central America and South America:

The violent death rate in Honduras is 94.7 per 100.000. Compare that to the violent death rate of Japan at 0.27 per 100,000. And, nine of the ten most violent countries in the world are south of the US border. 16 of the 20 most violent countries are also south of the US border. The remaining four are all small countries in Africa. So, what is happening is, we are getting illegal, and to an extent legal, immigrants coming into America. These are young men, pretty much the same demographics as those who came to Austria in 2015 and as those who still are coming to Austria. If you look at the boats full of them, if you look at the jail cells the border patrol gathers together: these guys are all military age. You can put them all into the military. They are invading our country, they are just not wearing uniforms. They come from the most violent countries in the world. [Emphasis added]

The following month, Tibbetts’ body was found in a cornfield, where prosecutors say Bahena-Rivera placed corn stalks over her to hide her body.