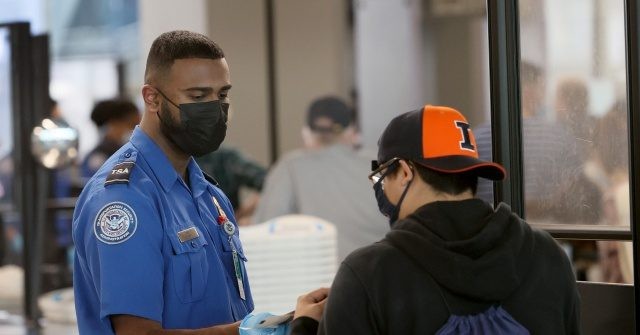 Border crossers and illegal aliens ought to be arrested if they use arrest warrants as a form of identification at United States airports, Sen. Steve Daines (R-MT) says.

For the last 12 months, President Joe Biden has overseen the release of hundreds of thousands of border crossers and illegal aliens into the U.S. interior. Many, as Breitbart News has detailed, have been flown into the U.S. — costing Americans at least $340 million in the process.

Instead, border crossers and illegal aliens are allowed to board domestic commercial flights using arrest warrants, federal custody booking records, and deportation orders as their IDs to get past TSA agents.

Daines, who filed legislation this week to ban the practice, said border crossers and illegal aliens ought to be arrested at airport checkpoints rather than boarding U.S.-bound flights.

Daines said in a statement:

It’s pretty simple — if an illegal immigrant presents their own arrest warrant as a form of ID, they should be immediately arrested, not cleared by TSA to hop on a plane in the United States. The fact this is even an issue is beyond outrageous. This is a threat to our national security and it must be stopped immediately.

If we learned anything from the September 11 attacks, it’s that our federal agencies must be diligent in screening passengers to ensure those flying don’t pose a terrorist or criminal threat to themselves or other passengers on board,” Allowing illegal immigrants, particularly those with arrest and deportation warrants, to board domestic or international flights is a public safety and national security risk of the highest extreme and against the recommendations of the 9/11 Commission. My legislation ensures those actively wanted by law enforcement don’t fly. Instead of aiding and abetting criminals, TSA should be turning these fugitives into the nearest law enforcement facility. [Emphasis added]

In all of 2021, more than two million border crossers and illegal aliens arrived at the southern border. More than 530,000 of those arrivals were released into the U.S. interior as nearly 45,000 were put on commercial domestic flights and flown into the country, often free of charge.