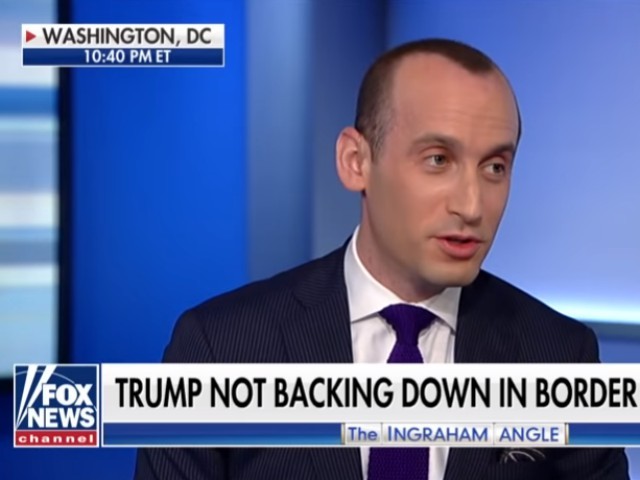 “There’s beautiful 30-foot rock solid bollard steel in the ground,” Miller told Fox News host Laura Ingraham. “You can go down and look at it.”

Miller said that over a hundred miles of wall on the southern border were either already built or currently under construction.

In 2016, Trump campaigned for a solid wall of hardened concrete, rebar, and steel, but since taking office, has touted the benefits of a “see-through” wall.

Democrat members of Congress have successfully prevented the president from appropriating significant funds to finish the project. In 2018, specific language in the Omnibus funding bill clarified that border security funds could only be used for “currently deployed steel bollard designs.”

Trump told crowds of supporters chanting “Build that wall!” at his campaign rallies that he had already secured $1.6 billion for border security in each of the two years of his presidency

“We’re building it in pieces and chunks, but I want to build it all at one time,” he told voters in Georgia prior to the midterm elections.

In his interview with Ingraham, Miller explained that the newly constructed border barriers were 30 feet tall, replacing inferior border barriers in crucial areas on the Southern border such as El Centro, San Diego, and Calexico.

“You see the old shorter barrier that predated this administration. You see people climbing over it and throwing human beings over it,” he said. “You need that 30-foot height.”

Miller argued that President Trump could win a shutdown showdown with Democrats to get significant funding for border security, including funding for more border barriers.

“This stand that we are taking right now with the entire nation watching and, frankly, the whole world watching is a stand that we think we are going to win,” Miller said.