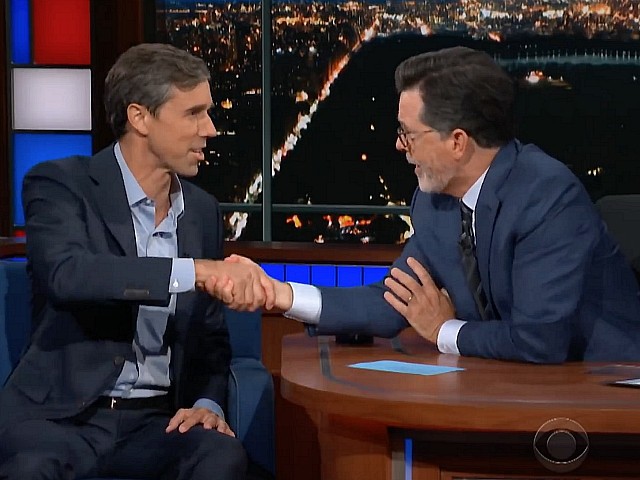 “Democrats control the House!” Colbert declared. “They can now open investigations into the president. And we’ll finally find out if Donald Trump has ever done anything unethical.”

“The Democrats have taken control of half of one of the three branches of government. All the GOP has is the other half of Congress, the Supreme Court and a president who does whatever he wants.”

Colbert went on to explain that voters were more interested on health care than Trumps’s warnings about illegal immigration.

“Now, apparently, voters responded to the Democrats’ call to expand health care more than Trump’s message: ‘Latinos are coming to hit you in the face with rocks!”

However, Colbert was left disappointed by the defeat of Robert ‘Beto’ O’Rourke, who — propelled by some $69 million in campaign cash and an endless amount of celebrity support — ran against incumbent Republican Ted Cruz and ultimately lost his race in Texas.

“Then again, why wouldn’t Ted Cruz win in Texas?” Colbert asked. “Because at the end of the day, real cowboys only love three things: barbecue, rodeo, and Canadians who went to Princeton and Harvard.”

“So once again, Ted Cruz defeats Beto O’Rourke,” he added. “Although by not being Ted Cruz, Beto’s still a winner.”

Following O’Rourke’s defeat, many establishment media pundits, Hollywood celebrities, and liberal activists speculated that he could be a 2020 presidential candidate. In his concession speech, O’Rourke claimed he was more hopeful than he had ever been about the future of his state and the country as a whole.