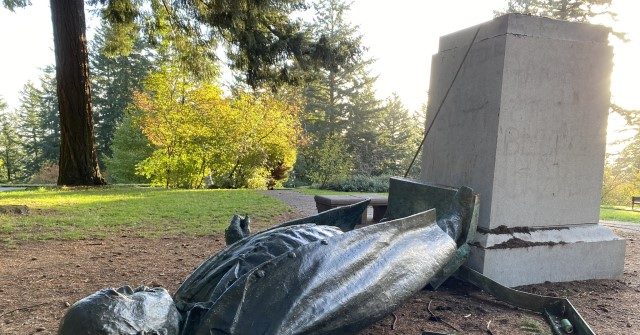 In the aftermath of a Monday night Antifa riot at the Portland Police Union headquarters, another statue of a historic American figure was found toppled and damaged. Local reports are unclear when the memorial was damaged, though some images purport to show the letters “BLM” written on the plinth.

A statue honoring Harvey W. Scott, considered “one of the more influential editors” of The Oregonian was discovered toppled and broken, according to the same newspaper Tuesday morning. The precise timing of the presumed vandalism and the perpetrators still remain unknown. Local reporting notes this marks the fifth Portland area statue to be torn down in 2020. Artworks dedicated to Presidents Teddy Roosevelt, Abraham Lincoln, Thomas Jefferson, and George Washington precede the local newsman, who died in 1910.

This is the 7th statue in Portland to be toppled or severely damaged. pic.twitter.com/JvHzlFha6v

Markings of “BLM” can be seen on the plinth in the photos.

The Oregon Historical Society notes Scott, an Illinois native, traveled the Oregon Trail in 1852 to settle in the Willamette Valley. In 1865, The Oregonian hired him as an editor after publishing one of his submissions. He would remain in that role until his death nearly half a century later. During that time, he also took an ownership stake in the newspaper and also served in a managerial role for the Associated Press. He refused U.S. ambassadorships to Belgium and Mexico in the final years of his life as being beneath his established career.

The historical society, for which Scott was a president for two years, summarizes his editorial views on the issues of the day:

Scott used the paper, with its large audience, to oppose many of the social reforms of his time including free high schools, state supported schools of higher education, prohibition, woman’s suffrage, organized labor, and Oregon’s system of direct primary, initiative, referendum, and recall. Scott also advocated “sound money” and led a campaign against the Greenback movement and Free Silver. An economic liberal not bound by the Republican Party line, Scott insisted that protective tariffs only served to create monopolies and enrich the few to the detriment of the many.