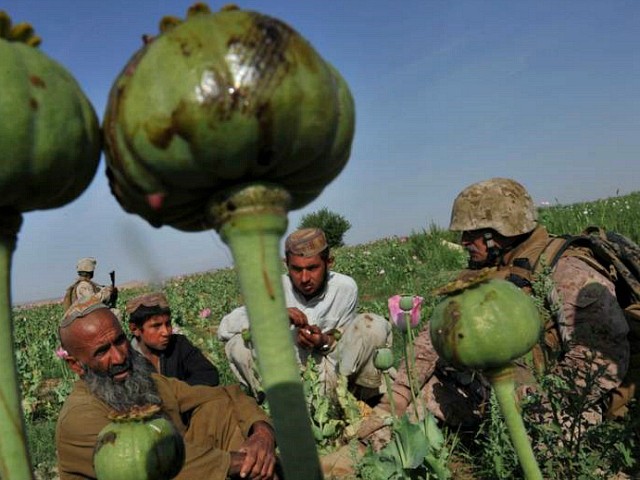 The Department of State (DOS) indicated to Breitbart News on Monday that the U.S. supports a “balanced counternarcotics strategy” in Afghanistan where the Taliban appears to remain among the world’s most prolific opium producers.

The department did not elaborate on what such a strategy looks like, and there is no indication that U.S President Donald Trump’s Special Representative for Afghanistan Reconciliation Zalmay Khalilzad has brought up the subject of opium and heroin amid key peace talks with the jihadist group this month.

The agency did note that talks are “far from done.”

Khalilzad is leading the Trump administration’s intensified efforts to facilitate peace talks between the Taliban and Kabul and has met with the terrorist group on several occasions.

Details of a draft peace agreement reportedly reached between the Afghan Taliban and the United States over the weekend surfaced this week without mentioning the terrorist group’s connection to opium and heroin.

A U.S watchdog agency reported last year that Afghan heroin is fueling the unprecedented lethal overdose epidemic that has killed tens of thousands in the United States and is considered a top national security threat.

Asked whether or not the subject of heroin has come up during the ongoing peace discussions between the United States and the Taliban, a spokesperson for the State Department told Breitbart News on condition of anonymity on Monday:

As Special Representative Khalilzad said [in the wake of negotiations in Qatar over the weekend], nothing is agreed until everything is agreed.  With key issues still on the table, the process is far from done.

The State Department supports a balanced counternarcotics strategy of programming to reduce both supply and domestic (Afghan) demand for illicit narcotics.

Referring to the discussions over the weekend, the spokesperson emphasized that the U.S. and Taliban have not agreed on an official peace pact, telling Breitbart News:

As Ambassador Khalilzad said, the talks with the Taliban last week were productive. He reports progress toward a lasting peace and negotiated settlement that will end the war in Afghanistan.

While discussions were positive, the talks concluded without an agreement. There are a number of issues that remain on the table, chief among these an agreement on an intra-Afghan dialogue and comprehensive ceasefire.

So far, the main point of contention between the U.S. and the Taliban appears to be the jihadist group’s reluctance to negotiate directly with Kabul.

The U.S. Afghan watchdog did note that DOS claimed to have “interwoven” counternarcotics into efforts to pressure the Taliban to join “reconciliation talks with Kabul,” the main goal of the Trump administration’s strategy to end the war. Nevertheless, there is no indication that the U.S. has broached the counternarcotics subject in recent negotiations with the Taliban.

The United States will not issue a separate counternarcotics strategy [from Kabul’s] that had been under review since 2014. Instead, [State] said counternarcotics is interwoven throughout the U.S. Administration’s comprehensive South Asia strategy. The goal of the South Asia strategy is to create conditions for a political process to achieve a lasting, Afghan-led peace.

Under the draft peace agreement, the U.S. would withdraw its troops from Afghanistan in exchange for assurance from the narco-jihadis that they will not allow terrorist groups like al-Qaeda and the Islamic State (ISIS/ISIL) to use their country to plan and carry out attacks against America and its allies.

In its latest assessment, SIGAR noted that “as of August 2018, counter threat-finance operations targeting the Taliban’s revenue streams have destroyed 200 drug-related targets and denied the Taliban approximately $46 million in revenue, according to Department of Defense (DOD) statements to the Wall Street Journal.”

SIGAR has criticized the U.S. airstrike campaign against the Taliban’s heroin operations as too expensive, noting that the terrorist group is able to replace the drug labs in days.

In August 2017, the U.S. State Department acknowledged that a peace pact between the Colombian government and the Revolutionary Armed Forces of Colombia (FARC) rendered the South American country the world’s top producer of cocaine again, further fueling overdose deaths linked to the drug in the United States.

Similar to the Taliban, the FARC is a U.S.-designated terrorist group considered one of the largest drug trafficking organization in its host country.

Although the United States has invested more than $8 billion on counternarcotics operations in Afghanistan since the war began in October 2001, the country remains the world’s top producer of opium, the main ingredient in heroin.

While the vast majority of heroin in neighboring Canada comes from Afghanistan, the U.S. Drug Enforcement Agency (DEA), a component of the Department of Justice (DOJ), has repeatedly insisted that only a small portion makes it onto U.S. streets, noting that Latin America is the primary source of the drug in the United States.

Many of the U.S. regions experiencing a heroin epidemic are located along or near America’s border with Canada.