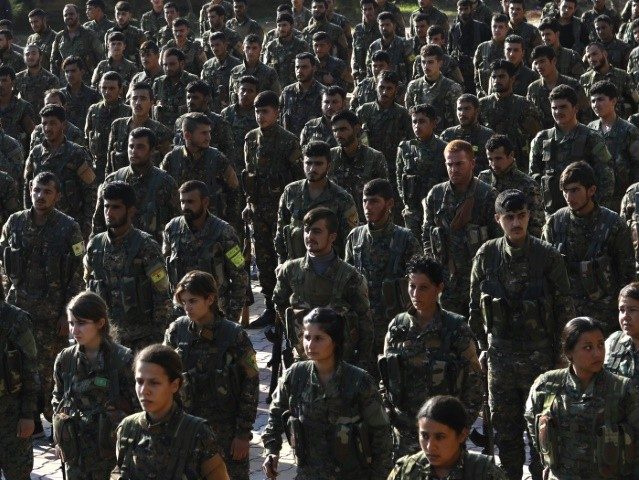 WASHINGTON, DC — A top U.S. Department of State (DOS) official, while testifying before a House panel on Thursday, cautioned Turkey that military action against the American-allied Kurds in northern Syria is “unacceptable.”

The comments from James Jeffrey, the State Department’s special representative for Syria engagement, came after a spokesperson for the U.S.-backed Kurdish People’s Protection Units (YPG) in Syria reportedly said last week that the group is ready for dialogue with Turkey, which has demanded their removal despite their key role in fighting the Islamic State (ISIS).

YPG fighters, who lead the U.S.-allied Syrian Democratic Forces (SDF), have maintained control over large swathes of northern Syria near the Turkish border with the help of the American military.

Despite Turkey’s concerns about the YPG-PKK link, which the DOS official himself acknowledged earlier this month, the United States continues to support the Kurdish fighters as the most effective force against the Islamic State (ISIS/ISIL).

U.S. support for the YPG has strained relations between Washington and Ankara.

On Thursday, Jeffrey told the House Foreign Affairs Subcommittee on the Middle East via written testimony:

Turkey points to links between the SDF and PKK, and these unfortunate incidents detract from our efforts to defeat ISIS and coordinate other elements of our overall Syria policy. The United States remains committed to working with Turkey to address Turkish security concerns, including along its borders, and we support Turkey in its fight against the PKK, while attempting to reduce tensions. And as we have said before, uncoordinated, unilateral military action into northeast Syria by any party, particularly where U.S. personnel are present, is of great concern, and any action that endangers U.S. personnel is unacceptable.

Ankara’s military advances against the YPG in northern Syria over the past two years have put U.S. troops directly in the path of advancing Turkish troops.

Turkey and the United States have been working to avert direct confrontation, even as Turkey aims to crush the U.S.-backed YPG fighters.

Jeffrey’s testimony came days after he conceded that the U.S.-backed Kurdish group in Syria is linked to the PKK, a group that the United States and Turkey have designated as a terrorist organization.

Hurriyet Daily News quoted Jeffrey as saying during the Dense One Summit on November 15 that the political wing of the YPG, the Democratic Union Party (PYD), is the “Syrian offshoot” of the PKK terrorist group.

Right now, the [Kurdish-led] SDF are working to liberate the last ISIS-controlled pocket of territory in Syria and operating throughout northeast Syria to clear ISIS cells. Although we are nearing the end of ISIS’s territorial control in Iraq and Syria, our job is not done, and we remain focused on the enduring defeat of ISIS and al- Qa’ida, ensuring they do not return.

The U.S. military is backing the SDF with weapons, air support, and around 2,000 special forces troops on the ground in the fight against ISIS.

Under the previous administration, then-U.S. Secretary of Defense Ash Carter also admitted that the YPG is an extension of the PKK.

Over the past two years, Turkey has launched operations to remove the YPG from areas in Syria west of the Euphrates, particularly Manbij and Afrin. In recent weeks, Ankara has threatened an offensive to push the YPG out of the Kurdish-held territory East of the Euphrates, near the Turkish border.

“The United States has been struggling to keep a fine balance between the demands of its NATO ally Turkey, which considers the YPG a terror group, and its Kurdish allies in the war against ISIS,” Rudaw acknowledged recently. “The latest measure being taken by Washington is to establish observation posts to monitor the border between Syria and Turkey.”

In a move seen as a concession to Turkey, the U.S. agreed to pull out its YPG allies from areas in Syria near the Turkish border, namely Manbij, and stand out of the way while the Turkish military forced the Syrian Kurds out of Afrin.