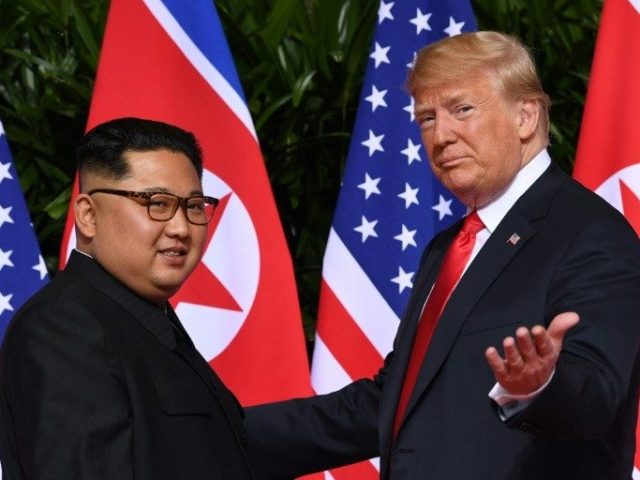 President Donald Trump confirmed a date and location for his anticipated second in-person meeting with North Korean dictator Kim Jong-un during his State of the Union address on Tuesday. The pair has planned to meet for two days, February 27 and 28, in Vietnam.

The meeting will be the second for the American president and the third-generation communist dictator, the first occurring in June 2018 in Singapore. Prior to the State of the United address, White House officials had confirmed that Washington and Pyongyang were hoping to schedule their meeting for the end of February, but had yet to cement the details of the event.

“As part of a bold new diplomacy, we continue our historic push for peace on the Korean Peninsula,” Trump told Congress. “Our hostages have come home, nuclear testing has stopped, and there has not been a missile launch in 15 months. If I had not been elected President of the United States, we would right now, in my opinion, be in a major war with North Korea.”

Despite the achievements Trump listed regarding the relationship between North Korea and the United States – two countries technically at war since 1950 – the president emphasized that “much work remains to be done,” particularly on at the highest levels of both governments.

“My relationship with Kim Jong-un is a good one,” he declared. “Chairman Kim and I will meet again on February 27 and 28 in Vietnam.”

Multiple reports published before Trump’s announcement Tuesday suggested Vietnam a likely location for the summit. Vietnam, like North Korea, is ruled by an authoritarian Communist Party, but does not enjoy as positive relations with China and, as a result, has attempted to foster closer relations with the United States. The Vietnamese government likely offered similarly neutral territory as Singapore while also pleasing the fourth party to the ongoing Korean War: China.

The first summit between Trump and Kim focused on both the Korean War and North Korea’s illegal nuclear weapons program. In the joint declaration signed by the two world leaders, both agreed to promote the “denuclearization of the Korean peninsula,” and Kim explicitly promised the return of the remains of American soldiers killed during the active period of the Korean War (1950-1953) to the United States. North Korea has since attempted to define “denuclearization” not as an end to its nuclear weapons program, but the removal of American troops from the Korean peninsula, as the U.S. is a nuclear power.