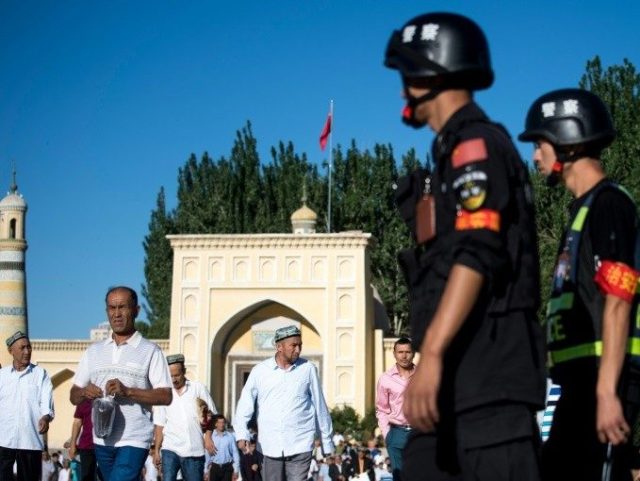 Chinese authorities in Muslim-majority Xinjiang ordered members of the majority-Muslim Uighur ethnic minority this weekend “to surrender within 30 days” if they have been accused of “terrorism,” or dissent from the Communist Party.

Those who surrender will be eligible to avoid prison and instead join the estimated million being held in internment camps China calls “vocational centers,” where they are forced to swear allegiance to Communist Party leader Xi Jinping and abandon their faith or face various forms of torture.

China has reportedly forced Uighurs accused of engaging in terrorist and separatist activities into various concentration camps, also known as re-education centers, located across Xinjiang, an accusation that Beijing denies.

Beijing argues that the camps are vocational training centers used to purge the “three evil forces” of separatism, extremism, and terrorism from the Muslim Uighur community.

Various human rights groups, such as Amnesty International, have long accused China of conducting a “campaign of systematic repression” against Muslim residents in the predominantly Uighur (or Uyghur) Xinjiang province.

Citing a notice published on the official WeChat account of Hami Cyberspace Affairs Commission on Sunday, the state-run Global Times noted that Uighur suspects of terrorist and separatist activities should “turn themselves in to authorities by visiting police stations, procurators, courts, or by letter, telegram or phone,” adding that those who surrender would face a “lesser punishment.”

Li Wei, a counter-terrorism expert at the China Institute of Contemporary International Relations in Beijing, conceded to the Global Times that “such notice served to deepen the campaign of cracking down on terrorism in Xinjiang, as regional vocational training centers have achieved great success in anti-radicalization of Xinjiang society.”

Wei reportedly indicated, “Some terrorists who surrender, instead of being put into prisons, may go to vocational training centers to learn practical skills, such as language and knowledge to better understand the religion.”

According to the U.S. government and United Nations, China has forced hundreds of thousands of Muslim Uighurs into the concentration camps in Xinjiang, the country’s largest province, as part of Bejing’s efforts to bring them back into the fold of the ruling Communist Party.

According to its annual report unveiled last month, the U.S. Congressional-Executive Commission on China found:

Security personnel at these facilities reportedly subjected detainees to political indoctrination and forced marching; overcrowding; poor quality food; and torture, including in the forms of medical neglect and maltreatment, waterboarding, sleep deprivation, lack of adequate clothing in cold temperatures, and other forms of abuse.

Global Times claims that Communist authorities in Xinjiang “urged suspects of violence and terrorism and those influenced by the three evil forces of separatism, extremism, and terrorism to surrender within 30 days for leniency.”

The state media outlet reveals that local authorities listed 18 situations in which Muslim Uighurs should turn themselves in, including:

People who receive training from terrorist groups, or purchase maps, GPS, compasses, telescopes, ropes, tents or other training materials, and help download or provide links of audio, video, and text related to terrorism or offer VPN for overseas websites should surrender.

Those who send minor children or students to learn religious doctrine or advocate using the Koran to regulate normal life and reject Party officials should also turn themselves in, and those who get married or divorced using religious rites, commit bigamy or interfere with family planning policy in the name of religion should surrender.

Moreover, Communist authorities also urged Uighurs who prevent “others from watching television programs or induce others to boycott national preferential policies, such as rejecting government-subsidized housing or calling for a ban of goods belong to Han people, to give themselves up,” Global Times revealed.

This month, the Global Times noted that China’s People’s Liberation Army (PLA) had intensified its counterterrorism and border patrol activities in Xinjiang.

Some experts from the Council on Foreign Relations have linked some Chinese Uighurs to al-Qaeda and Taliban-affiliated jihadi groups like the East Turkestan Islamic Movement (ETIM) and the Turkistan Islamic Party (TIP) that operate in the Afghanistan-Pakistan region, which the Pentagon says is home to the “highest concentration” of terrorist groups in the world.

Uighur (or Uyghur) members of al-Qaeda and the Islamic State (ISIS) have threatened to attack China. Bejing has accused some Uighurs of carrying out attacks in China in the past.

Chinese authorities have also reportedly sent some Uighurs who converted to Christianity to the mind-transformation camps.

A Canada-led coalition of 15 Western ambassadors in Beijing is pushing for a meeting with Xinjiang’s Communist Party boss to discuss the rampant human rights abuses against Uighurs, Reuters reported last week.

Although the letter did not include an American envoy, U.S. President Donald Trump and members of Congress have expressed a willingness to sanction Beijing for the abuses at the concentration camps in Xinjiang.