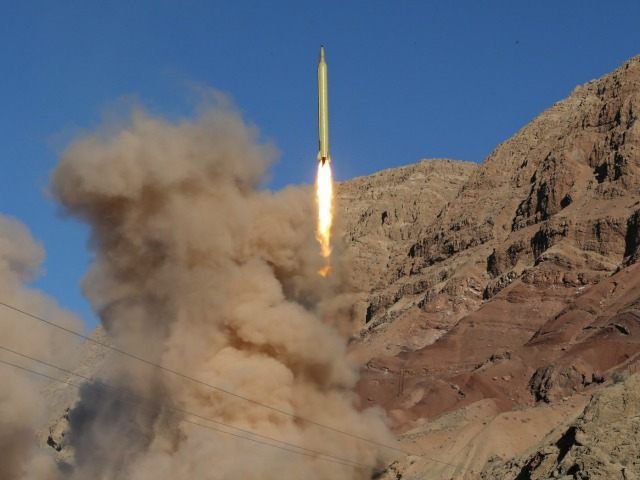 Iran test-fired a medium-range ballistic missile over the weekend capable of carrying a nuclear payload to parts of Europe, Israel, and anywhere else in the Middle East, a top U.S. Department of State (DOS) official stressed Monday, arguing the move violates a United Nations resolution.

On Saturday, U.S. Secretary of State Mike Pompeo revealed in a statement:

The Iranian regime has just test-fired a medium range ballistic missile that is capable of carrying multiple warheads. The missile has a range that allows it to strike parts of Europe and anywhere in the Middle East. This test violates UN Security Council resolution 2231 that bans Iran from undertaking “any activity related to ballistic missiles designed to be capable of delivering nuclear weapons, including launches using such ballistic missile technology…”

As we have been warning for some time, Iran’s missile testing and missile proliferation is growing. We are accumulating risk of escalation in the region if we fail to restore deterrence. We condemn these activities, and call upon Iran to cease immediately all activities related to ballistic missiles designed to be capable of delivering nuclear weapons.

Citing an unnamed defense official directly familiar with the initial data from the launch, CNN downplayed the test, reporting that it did not appear to display any capabilities that the United States was not already aware of, adding that “it did not pose a direct threat.”

Despite U.S. condemnation of its missile program, the Iranian military affirmed that it will keep conducting tests, Radio Free Europe/Radio Liberty (RFE/RL) reported on Monday.

On Sunday, the regime-aligned Tasnim news agency quoted Brig. Gen. Abolfazl Shekarchi, a spokesman for Iran’s armed forces, as saying: “Missile tests … are carried out for defense and the country’s deterrence, and we will continue this.”

Tehran will “continue to both develop and test missiles,” he also said, adding that such activity “is outside the framework of [nuclear] negotiations and part of our national security, for which we will not ask any country’s permission.”

The Iranian general did not specifically confirm that Iran test-fired a missile over the weekend.

On Monday, Brian Hook, the senior policy adviser to Pompeo and special representative for Iran at DOS, acknowledged that Iran has failed to heed the U.N.’s 12-year-old demand to drop its ballistic missiles program.

For the last 12 years, the UN Security Council has been telling the Iranian regime to stop testing and proliferating ballistic missiles, and Iran continues to defy the UN Security Council, which is acting like an outlaw regime. … It was a mistake to exclude missiles from the Iran nuclear deal, and it is one of the principal reasons that the United States left it.

CNN argued that the U.N. resolution 2231, which endorsed the implementation of the controversial Iran nuclear deal, does not explicitly prohibit Iran from undertaking any activity related to the testing of ballistic missiles to the dismay of opponents of the pact, officially known as the Joint Comprehensive Plan of Action (JCPOA).

“Iran is called upon not to undertake any activity related to ballistic missiles designed to be capable of delivering nuclear weapons, including launches using such ballistic missile technology,” the resolution states.

Hook from DOS confirmed the missile tested by Iran over the weekend is capable of carrying a nuclear payload.

“Iran has launched missiles that are capable of carrying multiple warheads, including a nuclear weapon,” he said.

Bahram Qassemi, a spokesperson for Iran’s Foreign Ministry, dismissed Pompeo’s claim that the missile test contravenes the U.N. resolution, saying in a statement on Sunday, “The country’s missile program is just for defense.”

The interesting and of course farcical point here is that you are referring to a resolution that you have not only violated by unilaterally and illegally withdrawing from the JCPOA, but also you urge others to breach it, and even threaten to punish or slap sanctions on them if they implement the agreement.

In May, U.S. President Donald Trump withdrew the United States from JCPOA, asserting that the agreement is flawed and failed to address the threats posed by the Shiite regime.

The threat from Iran is multifaceted, and certainly what they have done with this launch is violated the sense of the United Nations Security Resolution, that told them not to do these kinds of launches. It shows that our best efforts to try to talk them out of their aggressive support of terrorism is probably going to be as unsuccessful as the U.N.’s effort to stop them from launching missiles.

“Right now the strategic level of threat from Iran is less worldwide than Korea’s, but it is certainly significant regionally, and it could grow beyond that if it’s not dealt with,” he added.

Hook noted that U.S. President Donald Trump’s administration had unleashed a wave of sanctions, including those suspended under the 2015 Iran nuclear deal.

Insisting it would only use missiles for defensive purposes, Iran has repeatedly rejected negotiations over its missile program.