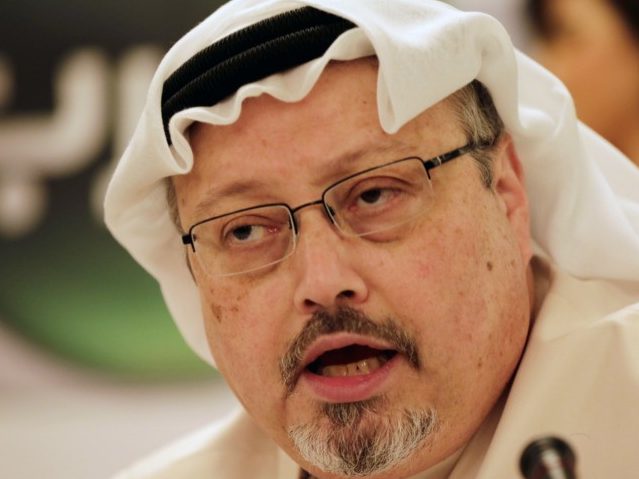 State Department spokeswoman Heather Nauert assured reporters during a regular press briefing Thursday that the Trump administration is engaged in the case of missing Saudi journalist Jamal Khashoggi “at the highest levels,” refusing to comment on what Washington suspects may have happened to him.

Khashoggi’s fiance Hatice Cengiz reported him missing after he entered the Saudi consulate in Istanbul seeking marriage papers on October 2. The Saudi government claims he went missing after leaving the consulate, but Turkish officials have accused Riyadh of killing him within the consulate building. The most sensational rumors surrounding his disappearance, originating from Turkish government sources, suggest that hired Saudi help killed Khashoggi, cut him into pieces, and extracted him from the embassy in small suitcases.

Nauert refused to confirm or deny any rumors circulating about the incident.

“As we have said from the beginning, we are not certain about what happened to Jamal Khashoggi. The Secretary released a statement earlier this week. The Vice President has talked about this. The President has talked about this. We are all concerned about his whereabouts,” she told reporters. “We don’t have any information on his whereabouts right now or what happened to him.”

“As you can see, anytime you turn on the news or you open the newspaper there is a lot of speculation, and there are a ton of rumors out there. We are making determinations and watching this for facts,” she continued. “We don’t have the facts yet. And so we are going to hold back on our comments until we have concrete information that the U.S. Government can share.”

Nauert emphasized that “this has the highest attention at the highest levels of the United States Government.” She added that Washington had “offered its support” to Turkey to investigate the situation but did not elaborate on what form that support had taken. She noted, too, that the Saudi ambassador to the United States had returned to Riyadh and was expected to fly back to Washington with more information on what the Saudi government has learned in the investigation of Khashoggi’s disappearance.

Ankara and Riyadh both claim to be working together to find Khashoggi even as the Turkish government blames the Saudi government directly for his disappearance. Turkey’s state-run Anadolu News Agency reported on Friday that the Saudis have sent an investigative delegation to work with Turkish officials in helping find the Washington Post journalist.

“A meeting between the delegations of the two countries is expected to be held on weekend, according to the officials, who asked not to be named due to restrictions on speaking to the media,” Anadolu reported.

The outlet added that passersby noticed heightened activity around the Saudi Istanbul consulate on Friday, mostly of officials who refused to speak to the gaggle of press organized outside. The officials entering and exiting the building reportedly comprised a joint Saudi-Turkish investigative team in the process of being formed.

The Washington Post, where Khashoggi wrote as a columnist, reported late Thursday that the Turkish government had told American officials they had audio and video evidence that Saudi officials killed Khashoggi in the consulate, citing unnamed officials. The “persuasive and gruesome evidence” reportedly shows a struggle between Khashoggi and his would-be killers. The Turkish government has not confirmed the report, nor have Washington officials claimed to have access to such tapes.

The Turkish government also revealed this week the discovery of 15 suspect Saudi nationals who spent a short time in the country, all during Khashoggi’s disappearance and yards from the consulate. At least one, unidentified Turkish sources claimed, was a forensics expert.

While the Trump administration has remained reserved in responding to the developing situation, several senators have threatened Saudi Arabia with sanctions should evidence prove Riyadh ordered Khashoggi’s killing. A bipartisan group including Sen. Bob Corker (R-TN), Sen. Bob Menendez (D-NJ), and Sen. Lindsey Graham (R-SC), among others, issued a letter to the White House stating that the killing of a journalist in such a way could trigger sanctions for human rights violations under the Global Magnitsky Act.