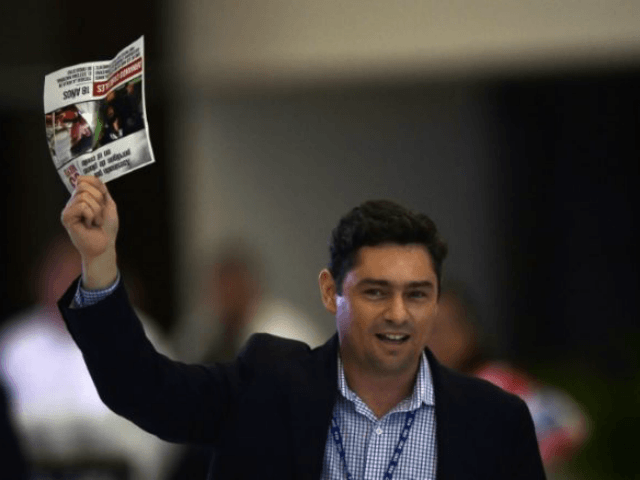 The U.S. State Department confirmed on Sunday that it has recognized Carlos Alfredo Vecchio, appointed by newly-inaugurated President Juan Guaidó this weekend, as Venezuela’s Chargé d’Affaires to the United States.

Accepting Vecchio as the official representative of the government of Venezuela to America is yet another step towards logistically deposing dictator Nicolás Maduro, who Washington asserted in a statement last week it would no longer recognize as the head of government of Venezuela. Maduro, who was in power between 2013 and 2019, claims the presidency based on a fraudulent election held in May in which observers documented fraud, violent intimidation, and the systematic and public banning of opposition politicians from the ballot.

The Venezuelan constitution requires the people to replace a leader that violates human rights or fails to keep the democratic order with an interim president, whose main task is to organize free and fair elections. Based on this constitutional provision, Guaidó, the head of the National Assembly, took over the presidency on Wednesday.

“The United States looks forward to working with Mr. Vecchio and other diplomatic staff as designated by interim President Guaidó,” its notice concluded.

Vecchio accepted the position with a statement expressing gratitude to Guaidó, Venezuela’s peaceful opposition protesters, and the United States, calling himself “the first diplomat of the free Venezuela.”

“I am very clear on what the mission is: to organize as much international pressure as possible until we achieve the end of the usurpation [of the presidency by Maduro] to install a transition government and organize free elections,” he asserted.

Guaidó made public statements this Friday stating that he was in communication with at least one Venezuelan consulate, in Houston, where the diplomats hoped to represent him and not Maduro.

Adding to the confusion resulting from two presidents attempting to run simultaneous diplomatic operations, Maduro’s Foreign Minister Jorge Arreaza stated on Monday that no Venezuelan diplomats remain in America. Arreaza claimed that Maduro’s regime was “acting in good faith … Maduro signaled that, if it was necessary, he would meet with [U.S. President Donald] Trump.”

This “good faith” claim appeared shortly after Maduro’s diatribe in response to Guaidó’s swearing-in, in which he decried the United States for imposing “some nobody” onto the country as president and demanded in profane terms that the United States withdraw all its personnel from the country within three days.

“Now it’s time for every other nation to pick a side,” he urged. “No more delays, no more games. Either you stand with the forces of freedom or you’re in league with Maduro and his mayhem.”

National Security Advisor John Bolton issued a statement this weekend, as the 72-hour window closed, warning that Washington would be willing to issue a “significant response” in the event that Maduro attempted to remove U.S. diplomats using violence.

“Any violence and intimidation against US diplomatic personnel, Venezuela’s democratic leader, Juan Guiado (sic), or the National Assembly itself would represent a grave assault on the rule of law and will be met with a significant response,” he said on Twitter.

Shortly after that, Maduro rescinded the original deadline and instead announced he had ordered a 30-day review of diplomatic ties with the United States.