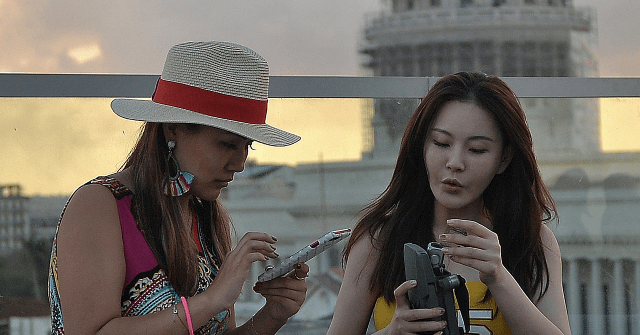 The ad campaign is called “Authentic Cuba” and is in part meant as a celebration of the 500th anniversary of the founding of Havana by the Spanish in 1519. According to Diario de Cuba, the campaign launched this week and adorns Chinese buses with iconic Havana images like the Malecón, the city’s seawall, and the Havana Bay, as well images of tourists scuba diving and engaging in other aquatic activities.

Cuba Sí, a pro-Castro regime outlet, detailed that the ads were placed on buses whose routes hit major business centers and “centers of touristic importance in the three cities,” so as to maximize the possibility of attracting wealthy Communist Party members. The campaign is the third of its kind by the tourism ministry in China.

China and Cuba enjoy close ties as fellow communist countries. In both, the Communist Party is the supreme organ of governance and its chairman the most powerful man in the country. Both also maintain a largely ceremonial office of the presidency that is not elected by direct vote and serves primarily to help impose the will of the chairman on the rubber-stamp legislature. In China, both the chairman and president titles fall on Xi Jinping, rendering the presidency obsolete. Due to his advanced age, Cuban dictator Raúl Castro handed the presidency to Miguel Díaz-Canel last year while retaining the chairman title.

As president, Díaz-Canel traveled to Asia last November, stopping in Beijing to meet with Xi. During that encounter, Díaz-Canel promised to help boost the Chinese economy by bringing the Belt and Road Initiative (BRI) to the Americas. The BRI is a global infrastructure plan that began with China committing to recreating the ancient Silk Road, the route that connected Beijing to Europe for commerce. The BRI added a maritime component through the South China Sea, with the ultimate goal of connecting Asia to Western Europe. As the project grew, Xi expanded the scope of the BRI greatly beyond the original Silk Road into Africa and Latin America.

American officials have identified the BRI as a national security threat, as its projects often require developing countries to take out predatory loans from China, accept large waves of Communist Party approved migrant workers, and ultimately hand over its territory to the Chinese.

Díaz-Canel committed to signing up for BRI projects in November, placing the plan 90 miles from American shores.

“As socialist countries, China and Cuba are good friends, comrades, and brothers,” Xi Jinping said at the time. “Chinese people will never forget that Cuba, led by Comrade Fidel Castro, was the first nation in the western hemisphere to forge diplomatic ties with China 58 years ago.”

More recently, as Diario de Cuba noted, Cuban Foreign Minister Bruno Rodríguez offered to expand Huawei’s economic footprint in the island nation. Huawei is one of China’s largest telecommunications companies, run by Communist Party members in good standing and accused of intellectual property theft and espionage on behalf of the Chinese regime. Huawei’s chief financial officer, Meng Hongwei, is currently under house arrest in Canada on American charges of having conspired to violate sanctions on by doing business with the regime.

“We have traditional ties and business with Huawei, and Cuba has all the confidence in Chinese technology and in this company in particular,” Rodríguez recently said.

While the ongoing trade dispute with the United States has bruised the Chinese economy, Cuba needs Chinese investment more than China need’s Cuba’s diplomatic support. The Trump administration has increased sanctions on Cuba for its role in destroying Venezuela. The Castro regime has over six decades of experience violently repressing its citizens and began exporting that expertise to late socialist dictator Hugo Chávez. Today, under dictator Nicolás Maduro, Caracas relies on Cuban soldiers to torture, repress, and kill Venezuelan dissidents. Witnesses testify to Cuban communist soldiers using sleep deprivation and beatings on political prisoners in jails like el Helicoide, the former Caracas shopping mall that now serves as the headquarters of the Bolivarian Intelligence Service (SEBIN), the secret police. A former Maduro official estimated that nearly 100,000 Cuban government agents are currently operating in Venezuela.

The Cuban military, which organizes the torture of dissidents in Cuba and Venezuela, owns nearly every tourist business on the island. To cut into its funding, thus keeping it from being able to restock on ammunition and torture supplies, the Trump administration reimposed sanctions on underhanded tourist activities by Americans. Tourism is nominally banned under the current embargo, but the Obama administration allowed for a kind of travel called “people to people” exchanges, which allowed Americans to go to the island for tourism so long as they had an appointed tour guide and tight itinerary. Trump ended people to people exchanges this year and banned cruise ships, which began sailing from the United States to Cuba under Obama, from taking Americans to the island.

Trump also permitted, for the first time in history, Americans to sue corporations that traffic in property Fidel Castro stole from U.S. citizens during the 1959 Cuban Revolution. Castro “nationalized” every industry in the country in his first few years since taking over following then-President Fulgencio Batista’s flight out of Havana. Many of the businesses and properties stolen belonged to U.S. citizens or Cubans who became naturalized Americans. The first lawsuit in May after President Trump’s lifting of the ban on these legal actions was against Carnival Cruises for profiting off the use of the ports of Havana and Santiago de Cuba, which were stolen from American citizen families. With the ban on the cruises and international corporations intimidated by the fact that doing business with the Castro regime could land them in an American court, Cuba has lost a sizeable portion of its expected tourism revenue.

Rather than use the wealth of the Castro family – Fidel’s alone worth an estimated $900 million – to help keep citizens fed through the impact, the Castro regime imposed a strict ration system that has forced millions on the island to stand on market lines for hours waiting to buy basics like chicken, eggs, milk, and flour. The shortages have triggered large protests against the regime even though Cuba’s state media insists that President Trump is to blame.

In response to the protests, Cuba’s Interior Commerce Minister Betsy Díaz Velázquez said on state television that Cubans see rations “as a good thing” and blamed the shortages not on the Castro regime’s inability to secure food to respond to national demand, but on “hoarders” who are buying more than rations allow.