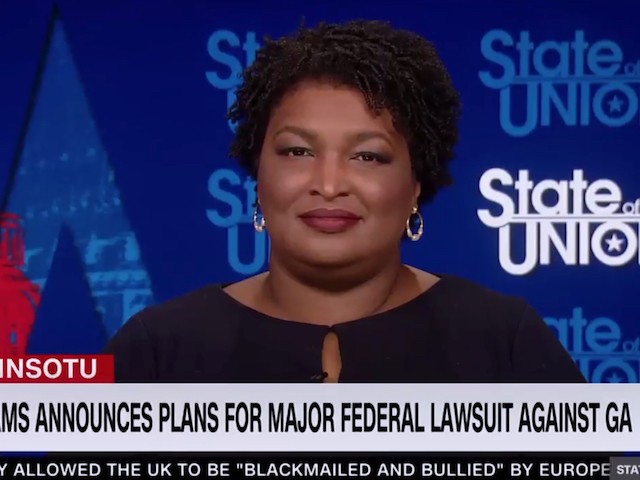 Sunday on CNN’s “State of the Union,” Stacey Abrams refused to say the election of Brian Kemp was legitimate after he won the gubernatorial race in Georgia.

When asked if there was deliberate interference in the election, Abrams said, “Yes. And I believe it began eight years ago with the systematic disenfranchisement of more than a million voters. It continued with the underfunding and disinvestment in polling places, in training and in the management of the county delivery of services. And I think it had its pinnacle in this race.”

When asked if Kemp is the legitimate Governor-elect of Georgia, Abrams said, “The law, as it stands, says that he received an adequate number of votes to become the governor of Georgia, and I acknowledge the law as it stands. I am a lawyer by training and I have taken the Constitutional oath to uphold the law.”

Host Jake Tapper asked again, “Is he the legitimate governor-elect of Georgia?”

Abrams said, “He is the person who won the adequate number of votes to become the governor.”

Tapper continued, “You’re not using the word legitimate. Is he the legitimate governor governor-elect of Georgia?

Abrams said, “He is the legal governor of Georgia. Words have meaning. I spent my lifetime not only as an attorney but as a writer and I’m careful of the words I choose. When he takes the oath of office he will be the legal governor of the state of Georgia, the legal victor. What you are looking to me to say is that there was no compromise of our democracy and there should be some political compromise in the language I use and that’s not right. What’s not right is saying that something was done properly when it was not. I will never deny the legal premature that says he is in this position and I pray for his success. But will not I say that this election was not tainted, was not a disinvestment and disenfranchisement of thousands of voters”