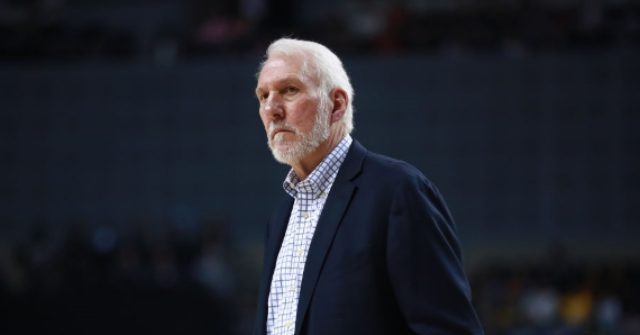 The NBA coach went on the attack against NFL Commissioner Roger Goodell for being “intimidated” by Trump, the New York Times reported.

“A smart man is running the NFL. and he didn’t understand the difference between the flag and what makes the country great — all the people who fought to allow [Colin] Kaepernick to have the right to kneel for justice,” Popovich said according to the paper. “The flag is irrelevant. It’s just a symbol that people glom onto for political reasons, just like [Dick] Cheney back in the Iraq war. . . . [Goodell] got intimidated when Trump jumped on the kneeling [and] he folded.”

Of course, there is a reason many equate Kaepernick’s protests to a direct attack on the flag and the country. That is because early in his protests, Kaepernick specifically said that was what it was all about. In August of 2016, he said, “I am not going to stand up to show pride in a flag for a country that oppresses black people and people of color. To me, this is bigger than football, and it would be selfish on my part to look the other way. There are bodies in the street and people getting paid leave and getting away with murder.”

Later, though, others seeking to make Kaepernick’s protest more politically palatable changed discarded the evidence of his beliefs that the flag was a symbol for a racist country along with his strong dislike for the police, and transform it into some airy claim that he just wanted equality. Originally, Kaepernick wore socks portraying all police as pigs, he wore t-shirts celebrating communist dictators, and he said in his own words that America was “never great.”

But Popovich had more to say, adding that “hypocritical” NFL owners put themselves in a bad spot by trying to appease both players and Trump at the same time.

“It’s just hypocritical,” Popovich continued. “It’s incongruent. It doesn’t make sense. People aren’t blind. Do you go to your staff and your players and talk about injustices and democracy and how to protest? I don’t get it. I think they put themselves in a position that’s untenable.”