A sharp contrast has been drawn between the relation of two European leaders to their people as 80,000 Italians show up in support of populist deputy prime minister Matteo Salvini, reviled as “far-right” by the establishment, while riots took place against progressive reforms in France by globalist president Emmanuel Macron, once hailed as the saviour of the European Union.

On Saturday, some 80,000 Italians turned up at the Piazza del Popolo (the People’s Square) in Rome as the right-wing League leader celebrated six months in office.

Supporters waved regional flags from across the country and those that read “Italians First,””Italy raises its head,” and “Six months of common sense government,” according to Agence France-Presse.

Salvini told the crowd, “We will work hard and do everything to make Italy come back to life.” 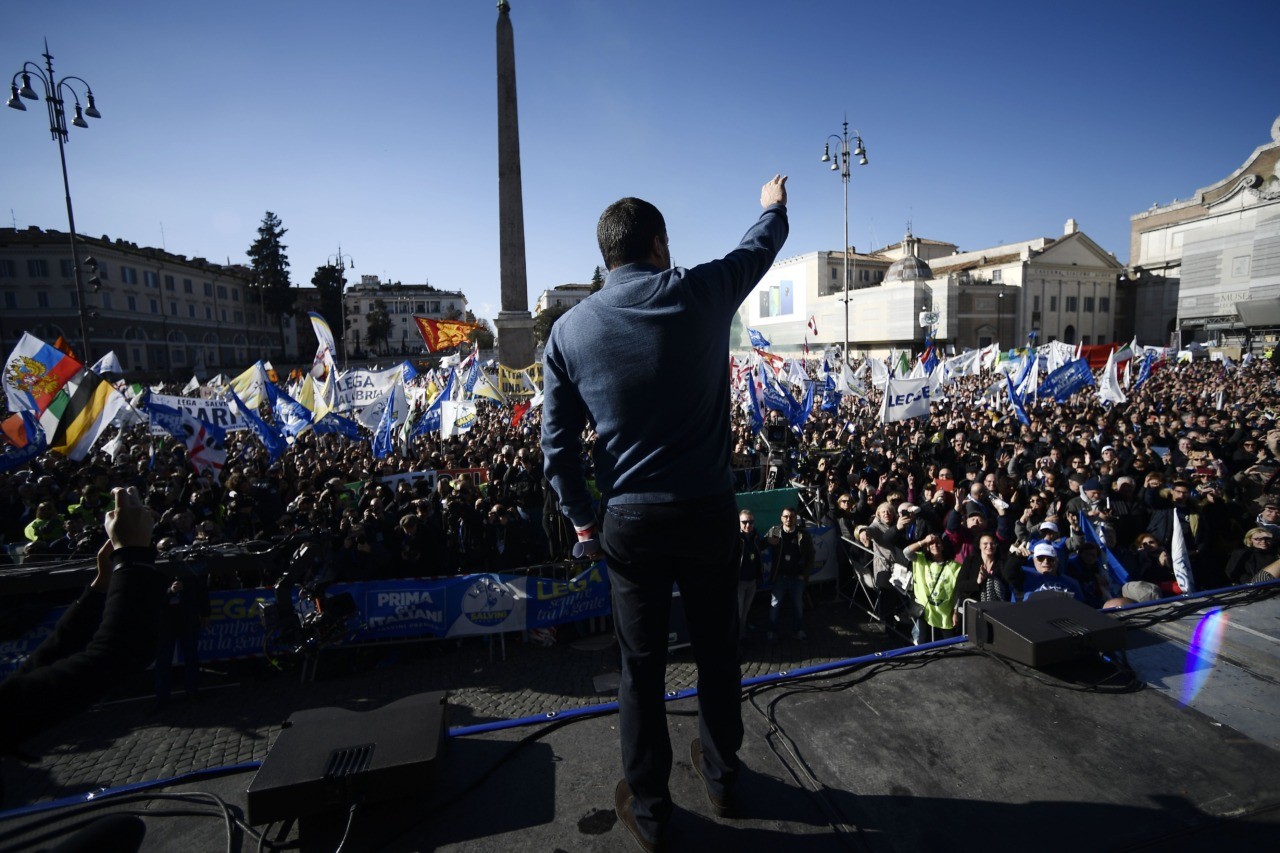 Mr Salvini also said that he would increase public spending, saying that austerity fuels violence as that seen in France during the Yellow Vest protests.

“Those who sow poverty reap protests, those who sow false promises reap the response of those on the margins and the countryside,” Salvini said.

Over the disagreement with the EU on its budget, the 45-year-old said, “We are afraid of nothing and nobody.”

Since Salvini’s League formed a government coalition with the anti-establishment Five Star Movement, the deputy prime minister, who also serves as the country’s interior minister, has succeeded in cutting illegal Mediterranean Sea migrant landings by 80 per cent.

He also made good on other public-backed campaign promises, including introducing tough new security laws making it easier to deport criminal migrants as well as scrapping the humanitarian visa for migrants who do not qualify for asylum but were, however, allowed to remain in the country for a temporary period.

The League’s popularity has increased from the 17 per cent following the March 4th national election, now polling at 30 per cent. 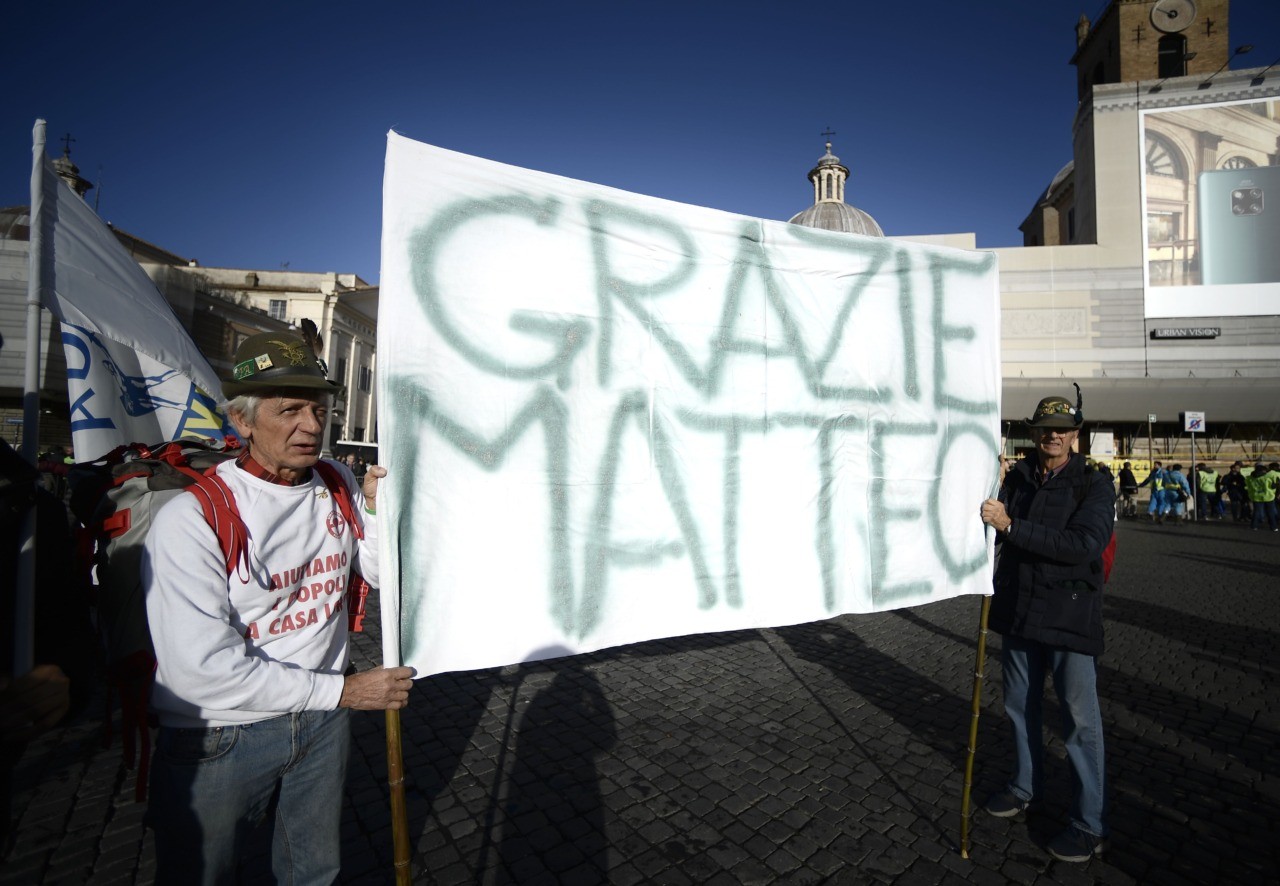 Lega party supporters hold a banner reading “Thanks Matteo (Salvini)” during a protest against European Union officials at Piazza del Popolo on December 8, 2018 in Rome. (Photo by FILIPPO MONTEFORTE/AFP/Getty Images)

Meanwhile in France on Saturday, the country saw its fourth straight weekend of protest by the Yellow Vests, with rioting and violence. The movement was initially a protest against a Paris Climate Accord-inspired fuel tax hike, and ballooned into action against the UN Migration Compact, the cost of living, and other progressive reforms initiated by the Macron government.

The former investment banker has been deemed the “president of the rich,” with even his own appointed state officials condemning Macron for his disconnect from the French people, remarking that members of Macron’s government exude a “Parisian arrogance” when visiting prefectures outside of the metropolitan area.

Aggravating tensions, Macron has remained distant and made no direct statement to the public in the past week leading up to another weekend in protest. He is set to make a televised address Monday night in which it is anticipated he will propose potential solutions. 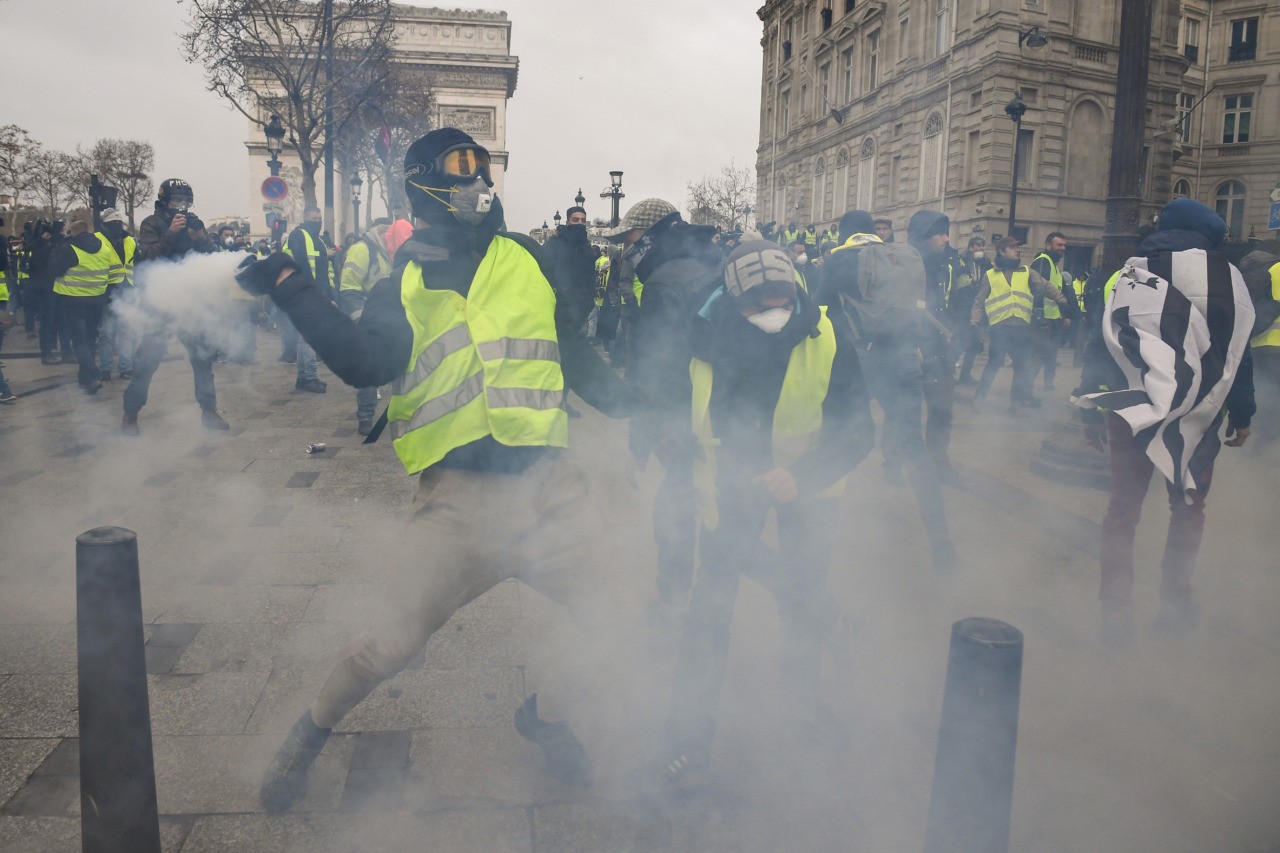 PARIS, FRANCE – DECEMBER 08: A demonstrator throws a tear gas canister during the demonstration of the yellow vests near the Arc de Triomphe on December 8, 2018 in Paris France.  (Photo by Jeff J Mitchell/Getty Images)

It is felt much of the energy behind the protests may have dissipated had Macron addressed the nation’s concerns earlier, notably the burden increasing fuel prices are having on working class Frenchmen and those in rural areas.

Instead, after the first protest on November 17th, Macron condemned the protesters, painting them all as far-right agitators, despite media, and later Macron’s own government, admitting violence came from infiltrators on both far sides of the political spectrum, including anarchists and criminal “thugs” from France’s suburbs.

Macron appeared to express more concern that the protests would cause damage to France’s global image than concern over the protesters’ grievances. 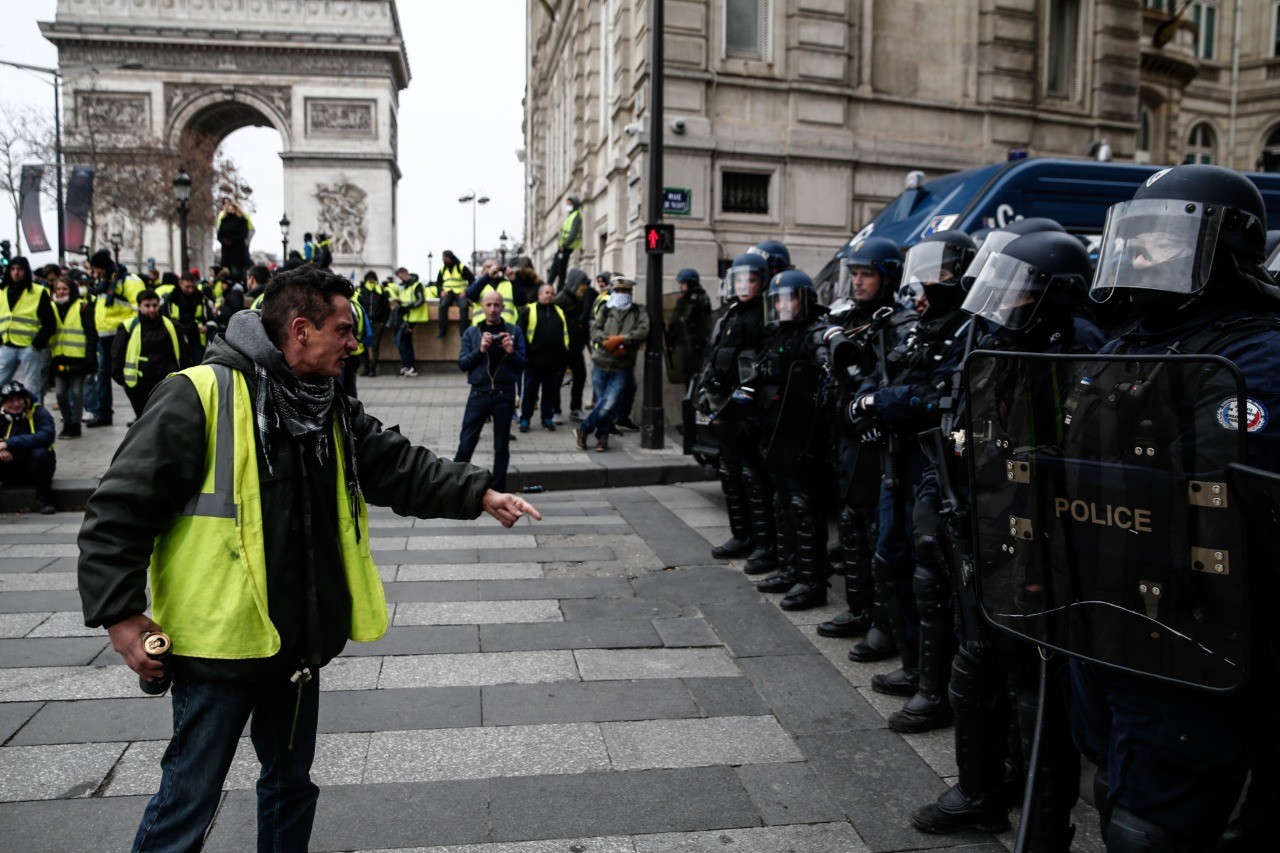 A protestor wearing a “yellow vest” (gilet jaune) faces riot police officers as he demonstrates against rising costs of living in front of the Arc de Triomphe in Paris on December 8, 2018. (Photo credit ABDUL ABEISSA/AFP/Getty Images)

On his only visit to surveying the damage wrought in early December, in uprisings considered the worst since the student rebellion of 1968, Macron’s government was said to have considered a state of emergency — while maintaining that he would not change course on his green agenda.

It was only after the Yellow Vests, who have high support amongst the French people, rejected a proposed deferment to more planned fuel tax increased that Macron backed down on the January hike. However, much of the damage in relations between France’s president and its people had already been done.

In ‘Act IV’ of the protests on Saturday, over 1,000 people were arrested and dozens injured across France, while gendarmes sent in armoured vehicles, branded with the flag of the European Union, to quell protest in Paris. 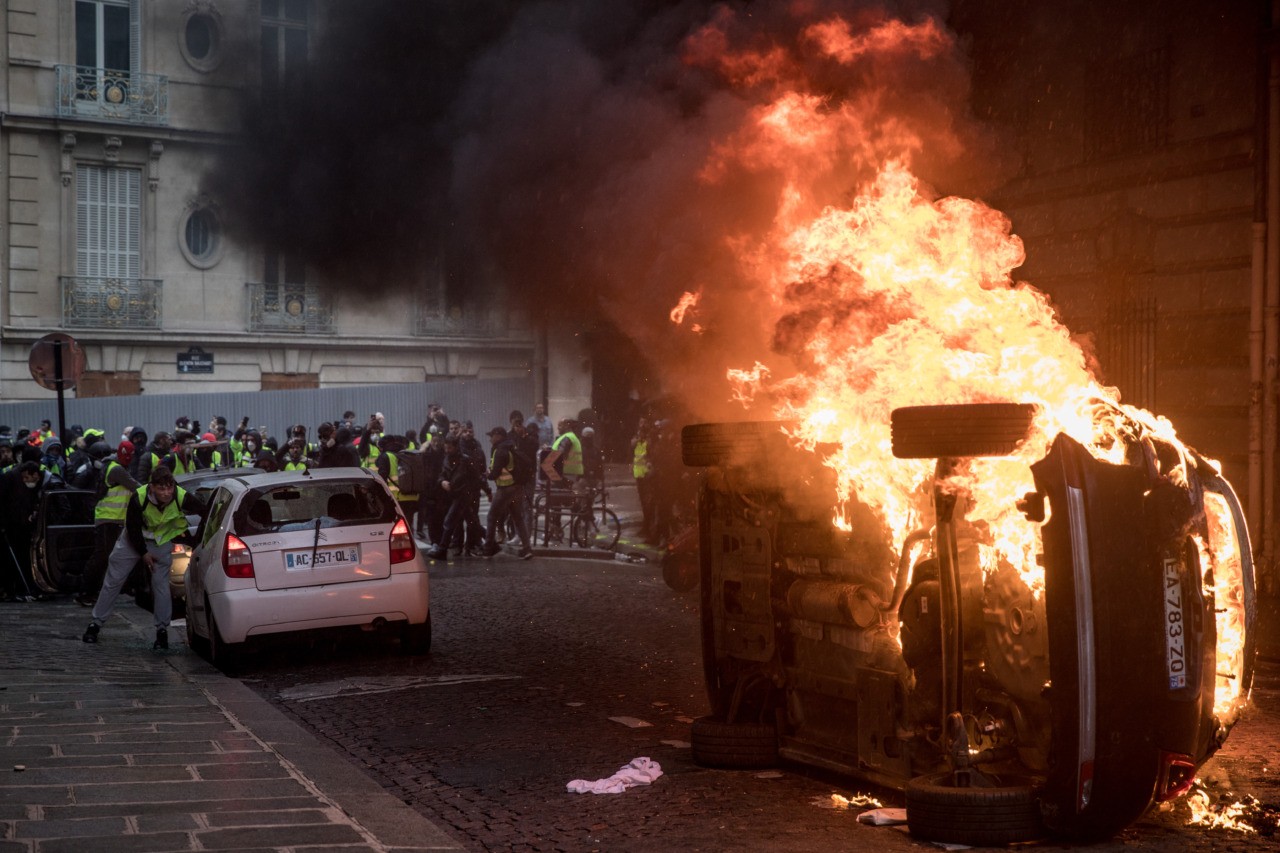 PARIS, FRANCE – DECEMBER 08: Protesters taunt police behind a burning car during the ‘yellow vests’ demonstration near the Arc de Triomphe on December 8, 2018 in Paris France. (Photo by Chris McGrath/Getty Images)