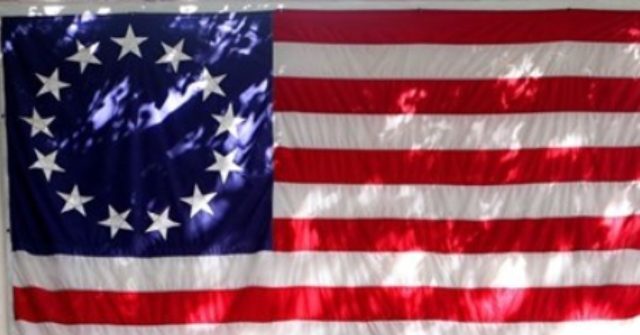 Former ESPN writer Darren Rovell jumped to his Twitter account Wednesday to come to post a poll which claimed that the “Betsy Ross” flag has been used as a symbol of white nationalism.

Rovell posted a poll on his Twitter feed which used as a premise, that Nike had dumped its Betsy Ross shoe line because the flag is used by white nationalists.

“Before the Nike controversy, were you aware that the Betsy Ross flag was used by white nationalists?” Rovell tweeted.

Before the Nike controversy, were you aware that the Betsy Ross flag was used by white nationalists?

With this tweet, Rovell seems to be hinting that Nike dumped its flag-themed shoes because of the flag’s link to racists. But this is wrong in nearly every respect.

Firstly, according to the Wall Street Journal’s sources, Nike dumped its Betsy Ross shoe line because former NFL player Colin Kaepernick claimed that the flag carried with it a “connection to historical slavery,” not because the Spirit of ’76 flag is currently being used by white nationalists.

It is ahistorical enough to say that the Betsy Ross flag is a symbol of slavery, but not even Kaepernick said it was a symbol of the white nationalist movement.

But it is also specious to claim that the flag is tainted merely because nutcases have recently decided to wave it around to support their horrid cause. After all, the same flag is used by a number of organizations that are in no way connected to any white nationalists.

For instance, the banner with the canton stars arranged in a circle is used on the seal of the Department of Veterans Affairs.

The flag was also used to decorate Washington D.C. during Barack Obama’s inauguration.

You mean the same ‘symbol’ that was used at the 2013 Obama inaguration and on the seal of the Dept. of Veterans Affairs? This is ridiculous…Colin’s ignorance of history is harming race relations and causing more division. pic.twitter.com/7twOT5eTdI

If that isn’t good enough for you, the flag is also part of the logo for the Philadelphia 76ers basketball team. A team that pays black players millions. Is an NBA team pushing a “symbol of white nationalism”?

Is he taking on the #76ers logo next? pic.twitter.com/NqbXr04AQz

Later, Rovell appeared to say that Nike should not have pulled the sneakers due to concerns over the flag being used by white nationalists. Which, again, was not what Kaepernick or Nike claims to have happened.

The Colin Kaepernick objection to the Betsy Ross flag should have been a teaching moment. We can’t allow everything that bad people choose to adopt as their own…to be theirs. When we step back and give in, they win.