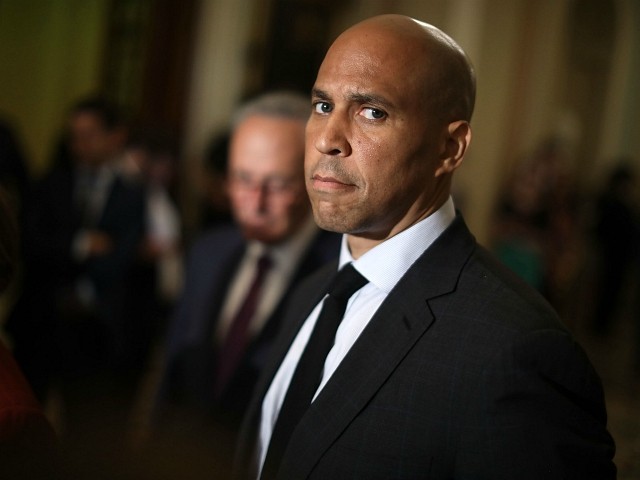 Sen. Cory Booker (D-NJ) is heading to Hollywood in the coming weeks to raise funds for his Senate re-election campaign as President Donald Trump rackets up criticism of the New Jersey Democrat’s presidential ambitions.

According to reports, Booker will hold a Los Angeles fundraiser at the residence of X-Men franchise producer Simon Kinberg, with entry ticket prices beginning at $150 and $5000 for chair level contributions. “While the event is in support of Booker’s Senate campaign, the fundraiser is likely to gauge Hollywood’s enthusiasm for a presidential bid. Booker is up for re-election to the Senate in 2020,” writes NBC News’ Dylan Byers.
In a recent interview with New York Magazine, Booker fanned the flames of a possible presidential bid, admitting that “of course” he was toying with the idea of a White House run, adding “It would be irresponsible not to.”

Booker’s 2020 buzz has caught the attention of President Donald Trump, who in a series of recent rallies and speaking events has taken aim at the Democrat’s record as the mayor of Newark.

Speaking before thousands of raucous supporters Saturday evening in Wheeling, West Virginia, President Trump accused the former Newark mayor of running the city “into the ground.”

“How ’bout Cory Booker? Did you watch his performance?” President Trump remarked about Booker’s antics during the confirmation hearings of Supreme Court nominee Brett Kavanaugh. “He ran Newark, New Jersey, into the ground and now he wants to be president, right?”

“What was the moment he said he had?” President Trump asked supporters about Booker’s antics during the confirmation hearings of Supreme Court nominee Brett Kavanaugh. “Spartacus!” rally attendees chanted, to which the president replied dismissively, “I don’t think so!”

“I dream of these people every night!” President Trump later said of the 2020 Democrat hopeful.

In addition to filling his campaign coffers on the West Coast, Booker will headline Iowa Democrats’ marquee fall banquet on October 6. With plans to visit the Hawkeye State, the senator is sending a strong signal to fellow Democrats weighing a White House bid: I’m serious about running for the presidency in 2020.

“We’ve said all along that we welcome anyone who wants to help us get Democrats elected in 2018, and we’re happy to have Senator Booker’s help,” Iowa Democrat party chairman Troy Price told Politico of Booker’s upcoming visited. “This dinner is only about the great opportunities ahead of us in this election this fall.”