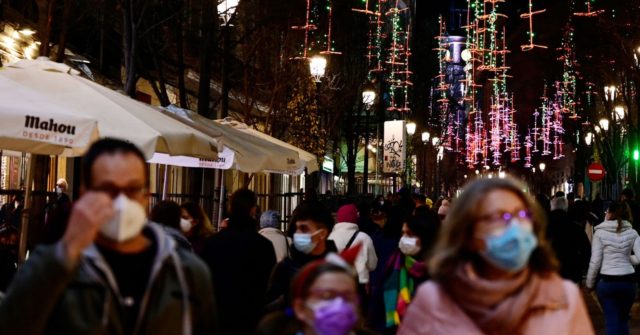 Opposition parties in the Spanish parliament have accused the government of using blackmail tactics to pass mandatory outdoor mask-wearing by including it in a vote on pensions.

The Spanish Chamber of Deputies validated a decree to mandate outdoor mask-wearing by a vote of 162 for to 153 against, with 28 abstentions on Tuesday but opposition parties have cried foul on the tactics used by the government.

The text of the mask decree was included within a pension decree known in Spain as the “paguilla”, which seeks to compensate retirees for the loss in purchasing power over the last year due to high levels of inflation,  a measure that was approved by the government last week.

Several parties, such as the populist party VOX, slammed the government for including the mask mandate in the pension vote, with VOX arguing that the text for the masks should have been presented in a separate decree, newspaper El Mundo reports.

“We are not going to give in to the blackmail of the Government that has included the revaluation of pensions within the decree on the use of masks,” the party wrote on Twitter and added, “If they want to help pensioners, bring it separately and we will support it.”

Euskal Herria Bildu — the left-wing Basque nationalist coalition — abstained from the vote, calling it “blackmail” by the government and said it would not accept further efforts by the government to use subterfuge on the parliamentary vote.

The Republican Left of Catalonia, a Catalan independence party, also accused the government of “blackmail” and claimed that outdoor mask mandates were “useless” and “not supported by science.”

Several regional political leaders, such as Madrid region president Isabel Diaz Ayuso, have called for a relaxation of outdoor mask use. “With what criteria does the Government decide that we continue to keep the masks outdoors at this time?” Ayuso asked on Tuesday.

Spanish Prime Minister Pedro Sánchez of the Socialist Party mandated outdoor mask-wearing in December as many other European countries were tightening restrictions during the initial spread of the omicron variant of the Chinese coronavirus.

However, in recent weeks, several European countries have begun to end all coronavirus restrictions, such as the UK, Ireland and Denmark. Finland also announced this week that all restrictions would be ended by mid-February.

Spain’s Catalonia region is to impose a “very restrictive” curfew in an attempt to reduce coronavirus cases, despite protests from the public prosecutor. https://t.co/ocgEr4h7mH