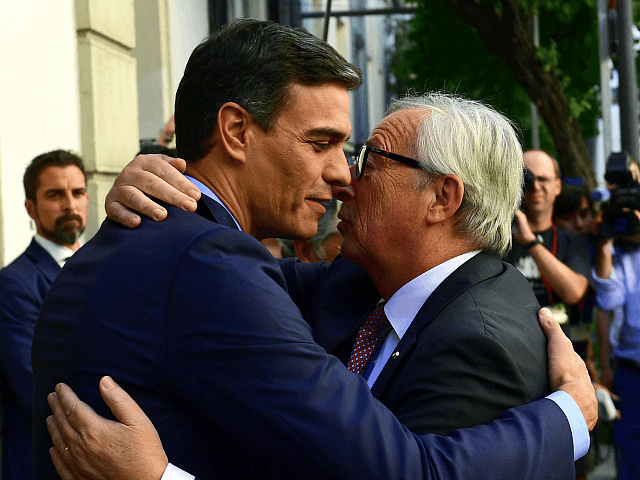 Spain’s pro-open borders socialist prime minister, Pedro Sánchez, has called on the British government to call for another Brexit referendum so their country can “come back to the EU”.

The Spanish Socialist Workers’ Party (PSOE) leader made his remarks in an interview with POLITICO, saying: “If I was Theresa May, I would call a second referendum — no doubt.”

The Spanish prime minister was a little vague in terms of the timeframe for a second Brexit referendum — currently being pushed by a number of EU loyalist MPs and pressure groups — some directly funded by the EU — telling the insider outlet: “I’d like to see the British government calling a second referendum.

“I don’t mean now, but in the future, so that it can come back to the EU. In another way, but back into the EU.”

Mr Sánchez also made the bizarre claim that it was not “democratic” for Britain to leave the bloc when the majority for Leave was 51.89 percent — not an enormous margin in percentage terms, but a majority of well over a million in terms of votes cast.

The Spanish leader — who was himself elevated to power by a vote of no confidence in the previous, ‘centre-right’ prime minister rather than an election — did not explain on how staying in the EU with less than half of the vote would be more democratic than leaving it, although he did suggest it was better to avoid such referendums in the first place.

“All these kind of referendums do is fragment… and polarise societies,” he complained.

Sánchez is the most senior foreign leader to have called publicly for the Brexit vote to be reversed, but such a course of action would be far from unprecedented in the history of the bloc, which has a habit of re-running or otherwise nullifying popular votes which go against its wishes.

Denmark voted against the Maastricht Treaty which transformed the European Community into the European Union in June 1992, but was pressured into voting again less than a year later.

This led to the original result being reversed, but also triggered riots described as “the worst in Denmark’s peacetime history” — with police shooting 11 eurosceptic demonstrators in Copenhagen.

Ireland rejected the Treaty of Nice, which expanded the European Union’s powers at the expense of its individual member-states, in June 2001, but was browbeaten into voting again in October, when, like Denmark, it produced a result that favoured the European Union and wasn’t required to vote again.

The proposed European Constitution, too, was rejected by voters in both France and the Netherlands, but eurocrats simply repackaged it as the Lisbon Treaty which the French and Dutch people were not allowed to vote on — despite a long list of EU leaders admitting they were substantively the same.

Only the Irish held a referendum on the treaty, as a result of constitutional requirements rather than government enthusiasm. As with Nice, the treaty was rejected — and, also as with Nice, the referendum was rerun shortly afterwards in order to produce a different result.