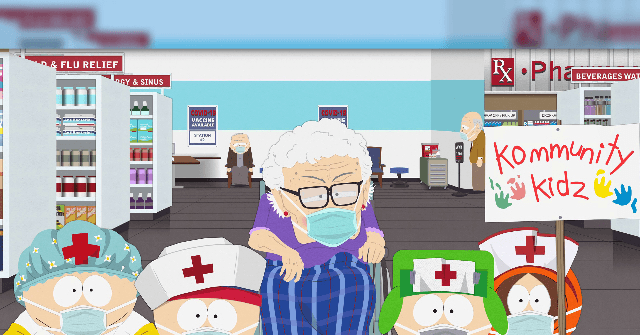 Comedy Central’s South Park devoted an hour-long special episode Wednesday to parodying the coronavirus vaccine and QAnon followers who refuse to take the jab. But in a twist, South Park residents discover QAnon folks were correct to suspect the country’s elites of nefarious intentions.

The new episode focuses on a local competition in South Park for the coronavirus vaccine with residents lining up outside the local Walgreen’s as a nightclub bouncer determines who gets to go inside. Amid the chaos, Cartman and his friends attempt to save their “broship” by first playing a prank on their teacher, who quits in disgust, and then scoring a stash of the coronavirus vaccines which they manage to steal by posing as volunteer workers helping the elderly.

In a subplot, South Park family man Mr. White becomes convinced his run-in with Mr. Garrison at the supermarket is a sign for the town’s QAnon community. The “Q” followers pull their kids from South Park Elementary and form their own home-schooling organization — the “Tutornon.”

Children of the Tutornon parents are known as “Lil’ Qties.”

The episode concludes with a twist: Mr. Garrison saves the town by striking a deal with the world’s secret elites for enough vaccine to inoculate everyone, with some help from Israel.

“Mr. White here has taught me a very important lesson — make sure you’re on the side of the people with the most power,” Mr. Garrison concludes.

South Park also took a swipe at Disney+ and HBO Max with a tweak to its regular pre-episode content warning. The streaming services have placed messages before classic movies and TV shows, including The Muppet Show, telling viewers that the material they are about to watch has now been deemed racist.

“This program includes negative depictions and/or mistreatment of people or cultures. These stereotypes were wrong then and will still be wrong in the future,” the warning said. “Like The Muppets, this show should not be watched by anyone.”