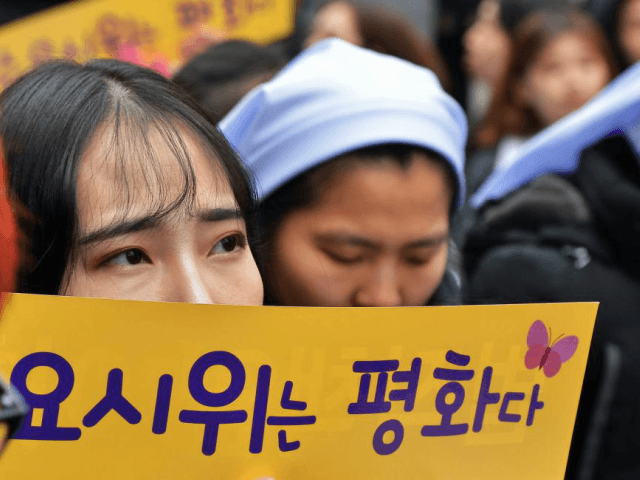 South Korean President Moon Jae-in and Japanese Prime Minister Shinzo Abe met on the sidelines of the U.N. General Assembly in New York City, as world leaders often do. The encounter began on a high note but turned sour with an argument over the “comfort women” issue that has divided South Korea and Japan for many years.

The most positive headline to emerge from the Moon-Abe summit on Tuesday was Moon conveying a message from Kim Jong-un that the North Korean dictator is prepared to begin a “dialogue with Japan” to “seek an improvement in relations.”

The Japanese have been clear that Japanese citizens abducted by North Korea must be returned, or fully accounted for if deceased, before a summit between Abe and Kim could occur. Abe himself stressed this point in his speech to the U.N. General Assembly.

Japanese Foreign Minister Taro Kano said on Tuesday that he found the message from Kim encouraging. The Foreign Ministry indicated it would be watching U.S. Secretary of State Mike Pompeo’s upcoming mission to North Korea carefully to see if the second summit between President Donald Trump and Kim Jong-un can be arranged. This would give the Japanese confidence that a summit between Abe and Kim would also be possible.

Moon and Abe “appeared wide apart” on the issue of women used as sex slaves by Imperial Japan in World War II, as Japan’s Mainichi put it:

Although Japan and South Korea agreed in 2015 to set up a foundation to care for the now elderly women, toward which the Japanese government contributed 1 billion yen, Moon told Abe in their latest summit that there is a strong public opinion that the foundation be dismantled.

In response, leading South Korean media outlets reported that Moon “effectively” told Abe that the foundation is being dissolved.

This coverage is completely different from the explanation by the Japanese government that the two leaders agreed to propose ideas so that the matter will not affect Japan-South Korea ties.

According to South Korean presidential spokesman Kim Eui-kyeom, Abe began to mention the comfort women issue, and Moon responded by repeating the official position of the South Korean government, that Seoul will not discard the 2015 agreement or renegotiate the deal. Moon also explained that the foundation is “in a situation prohibitive to its normal functioning because of opposition from former comfort women and the public, and there are strong voices demanding its dissolution.” Moon then stated that the two sides have to “think hard” to handle the issue.

Chosun Ilbo reports Abe implored Moon to “faithfully abide by the agreement” struck in 2015 with the administration of his impeached predecessor, Park Geun-hye.

Moon insisted he is honoring the deal, which Japan strongly believes should have put the comfort women issue to bed once and for all. The Japanese see the dissolution of the foundation established for these women as a sign the issue is climbing back out of bed, and they were alarmed by Moon implying the legitimacy of the Park administration’s deals with Japan might be called into question:

Regarding Korean forced laborers in wartime, Moon said that some evidence has emerged that the Park administration attempted to influence judges in trials involving compensation for the victims.

Among the 47 surviving former sex slaves, 36 accepted the money offered by Japan or said they would, and around 400 million yen has been spent. Dismantling the foundation could be interpreted as a refusal by Korea to hold up its side of the deal.

Troubled by the prospect of reneging on an international treaty, the Moon Jae-in administration took the peculiar position of saying it will not backtrack on the agreement but tap into its own coffers instead to compensate the victims.

The Ministry of Gender Equality and Family cobbled together a W10 billion fund for that purpose.

A diplomatic source in Japan gave Chosun Ilbo a worst-case scenario from Tokyo’s perspective: “If the Supreme Court of Korea makes a ruling ordering Japanese businesses to compensate victims of Japan’s World War II atrocities, Tokyo will instruct businesses not to comply. This could lead to another source of friction.”