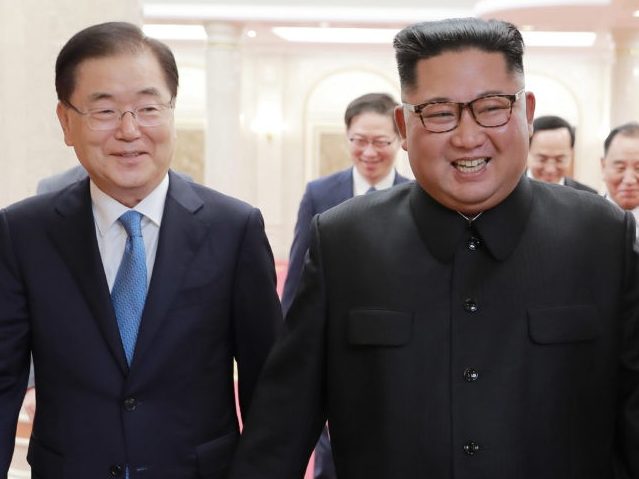 South Korean President Moon Jae-in told reporters following his return to Seoul from North Korea Thursday that he hopes to see all participants in the Korean War sign a peace treaty by the end of the year.

The Korean War technically remains ongoing since it broke out in 1950. While the two Koreas, China, and the United States signed an armistice agreement ending active hostilities in 1953, the parties have not signed a peace treaty, meaning they are still technically at war.

To end the Korean War, all four nations must sign an agreement to do so.

Moon appeared hopeful that, following his three-day trip to Pyongyang to discuss improving relations with communist dictator Kim Jong-un this week, that treaty could materialize in the near future.

“Chairman Kim expressed his wish to finish complete denuclearization at an early date and focus on economic development,” Moon told reporters, according to South Korean news agency Yonhap. The outlet noted that Moon “seeks to declare a formal end to the Korean War before the year’s end, and that he will bring up the issue when he meets [American President Donald] Trump in New York next week.”

Moon is scheduled to travel to New York for the United Nations General Assembly debate next week. He is expected to meet with Trump to discuss his summit with Kim on Monday.

“Among what we discussed, there are items that we did not include in the joint declaration,” Moon noted. “I plan to deliver such messages in detail to the U.S. side should I visit the United States and hold a summit again with President Trump in the future.”

Moon reiterated claimed by his presidential office on Wednesday that Kim Jong-un is prepared to dismantle the Yongbyon Nuclear Research Facility, a site believed to house at least one nuclear reactor and some centrifuges for enriching nuclear material, in exchange for concessions from Washington.

That promise made it into the text of the September Pyongyang Declaration, the text both Korean leaders signed following their meeting Wednesday. As per the reproduction of the text in North Korea’s state propaganda outlets, the North “expressed its willingness to continue with additional steps such as the permanent destruction of the Nyongbyon nuclear facility if the United States takes corresponding actions in line with the spirit of the June 12 DPRK-U.S. joint statement.”

Neither the statement nor further comments by Kim clarified what “corresponding actions” North Korea expects from the United States, though these are expected to include lifting international sanctions on the rogue state.

In addition to this promise, the two Koreas agreed to “actively promote cooperation and exchanges in various fields to give momentum to the atmosphere of reconciliation and unity,” among other similarly vague promises.

“The north and the south shared the view to make the Korean peninsula a peace zone free from nuclear weapons and nuclear threat and to ensure necessary practical advance early to this end,” the statement reads. The declaration does not specify whether “a peace zone free from nuclear weapons” would require the complete withdrawal of American troops from the Korean peninsula, as the U.S. is a nuclear power.

The two Koreas also agreed to make a joint bid to host the Olympic Games. Moon invited Kim to visit Seoul in response to the North’s hospitality, an invite Kim reportedly accepted.

The United States has responded positively to the summit between Moon and Kim. On Wednesday, Secretary of State Mike Pompeo responded to the meeting with a statement asserting, “the United States is prepared to engage immediately in negotiations.” He also noted that America would like to see the complete denuclearization of North Korea by 2021. Pompeo added that he invited North Korean Foreign Minister Ri Yong Ho to meet with him during his stay in New York for the UN General Assembly.

China, the other necessary party to signing a peace treaty for the Korean War, lavishly praised Kim for his performance during the summit this week. The state-run Global Times newspaper applauded Kim’s “courage and determination to allow North Korean people to see the development gap between the North and South,” particularly in accepting an invite to Seoul. Television coverage of Kim in Seoul would necessarily reveal the tremendous advances South Korea made as a free society while the North languished under communism, the Times argued, so Kim’s decision to visit Seoul shows he is “ready to recognize the lag in development and will embark on the path to reform and opening-up.”