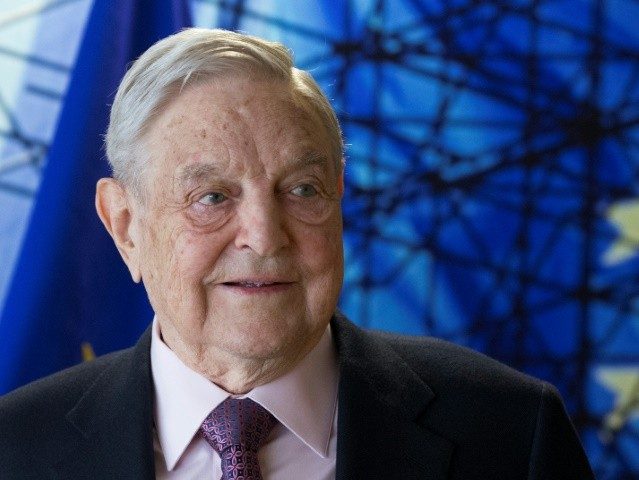 A Democratic operative who works for American Bridge 21st Century, the left-wing group funded by liberal billionaire George Soros, was arrested Tuesday after Nevada GOP gubernatorial nominee Adam Laxalt’s female campaign manager accused him of grabbing her arm and refusing to release it.

Las Vegas City Marshals arrested Wilfred Michael Stark III, 50, on Tuesday evening on the battery charge and he is currently being held in the Las Vegas city jail.

Stark is listed on LinkedIn as a reporter for American Bridge, the left-wing group founded in 2010 by David Brock which received more than $2 million from Soros between 2015 and 2016.

Stark has also been arrested on a number of other occasions, including one arrest in March for allegedly assaulting Interior Secretary Ryan Zinke’s female press secretary.

The city marshals said the arrest was a citizen’s arrest because it did not take place “in the presence of the marshals.”

The confrontation took place shortly after a Laxalt campaign event in East Las Vegas Tuesday evening when Stark allegedly burst into the room with the Nevada attorney general and began getting physical with his staff members.

“We’re used to trackers, but this guy was very physical—pushing me, pushing into members of my staff, screaming,” Kristin Davison, Laxalt’s campaign manager explained. “This man was physically, almost body-checking me. I was getting nervous for my safety, so we left, and went into an open room.”

Authorities added that the incident was “an apparent result of an altercation involving Mr. Stark entering one of the rooms…and attempting to question Attorney General Adam Laxalt.”

Davison said she was “terrified and traumatized” by the battery, which left her with bruises on her neck and arms.

“Politics is a little bit aggressive these days, but this is just insane. I’ve never seen anything like it,” Davison told Fox News.

The Laxalt campaign released a statement about the attack, decrying how politics in Nevada “reached a new low”:

Assaulting the female campaign manager of the opposing campaign is disgusting and it has no place in our system. This mob behavior from the left is out of control. Encouraging violence, as many prominent Democrats like former Attorney General Eric Holder have recently done, is having real, dangerous consequences.

Officials with the Nevada Democratic Party and Democratic candidate Steve Sisolak’s campaign have denied having any connection with Stark.

The latest attacks against Republicans come as many top figures in the Democrat Party — including Rep. Maxine Waters (R-CA), Eric Holder, and Hillary Clinton — have encouraged activists to carry out uncivil behavior against conservatives and President Trump’s supporters.

Other left-wing groups linked to Soros have had connections to violent activists. In 2011, the Soros-backed National Lawyers Guild selected violent revolutionary Bernadine Dohrn, who was involved in the communist revolutionary group Weather Underground, as its keynote speaker for a conference that year.