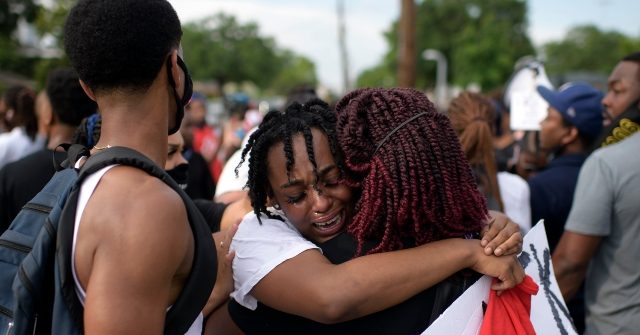 “Socialists, radicals, and anarchists were starting to infiltrate black organizations and black communities,” Johnson said, reflecting on how blacks have been targeted by various left-wing groups’ political messaging for years. “They were showing up at churches, festivals, hip-hop conventions. Every place that had black people, these socialists, these radicals, and these anarchists were showing up, and they were giving support to these people.”

Johnson noted Democrats’ political dominance in cities with large black populations. She highlighted the centrality of local governance in the oversight of local police.

“[There is a] partnership between these Democratic politicians and the policing,” Johnson said. “That’s where these people get their power, where they are allowed to not be held accountable for the way they treat the public.”

Johnson added, “A lot of the power that [police officers] get is given to them by these local politicians and negotiations that they have with their unions. Those things cannot be changed from the federal level. They have to be addressed at the state level.”

The conservative refrain of high school graduation as a buffer against poverty does little to help black communities afflicted with corrupted public schools, said Johnson.

Johnson continued, “These people that are coming from these indoctrination centers, what are they really learning? What do they actually have that they can be contributing members from the education system that you’ve given them? It’s a complete failure, and that won’t change at the federal level. It has to come at the local level.”

Johnson added, “You have your mayors, you have your [district attorneys], you have your judges. Every single aspect of our lives is under Democratic control. When we are saying systemic racism, what is our system? Our system is a republic. That means the government closest to you has the most power over your life. If they are telling you there is systemic racism, they are saying there is something systemically wrong with their local government.”

Conservatives can compete for political support against Democrats in black communities, Johnson maintained, urging conservatives not to fear engaging in conversations regarding race.

“Democrats are not going to reform themselves, and you cannot ask two or three black people to come in and take over an entire Democratic machine that has been entrenched for 60 years or more,” Johnson warned. “We have people who can do this, but we cannot do it by ourselves. We can’t beat this whole damn machine by ourselves.”

Black communities are not offered alternatives to left-wing politics when conservatives abandon them, Johnson stated.

“If you look at every single study, the majority of black people are overwhelmingly conservative,” Johnson said. “The problem is none of us show up to their communities. None of us offers solutions. None of us are there when … the cop kills the innocent man. Antifa is showing up and socialists are showing up, and if we do not become the force that gives these people an option and a choice, we are going to lose this country.”

Johnson cautioned, “If Republicans don’t get their asses on the ground, nothing is going to change. It is never going to be different. This will continue to get worse, and we are going to lose our country.”