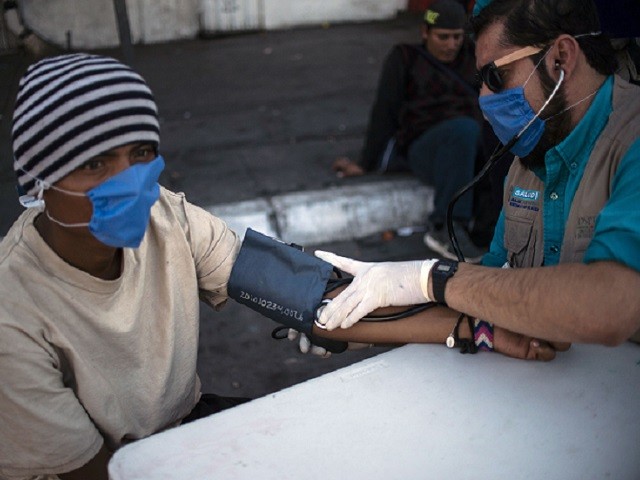 The Tijuana Health Department warned that many of the migrants residing in their city are presenting serious health issues, Fox News reported on Thursday morning. A spokesman for the agency said that more than 2,200 of the estimated 6,000 caravan migrants are currently being treated.

Of these, there are four confirmed cases of HIV/AIDS, four cases of chickenpox, and three cases of tuberculosis, the official stated. The department also claims that more than 100 migrants are infested with lice and there are multiple instances of skin infections.

Officials also expressed concern that the unsanitary conditions in the shelters could lead to an outbreak of Hepatitis.

The 6,000 migrants are being housed at the Benito Juarez Sports Complex. The shelter is only rated to serve about 1,000 people. The migrants are being served by only 35 portable bathrooms and officials had to place “No Spitting” signs in the shelter due to the rampant coughing and spitting taking place.

Tijuana Social Development Director Mario Osuna Jimenez told USA Today that the city is scrambling to prepare additional indoor facilities to house the migrants. “We’re worried about the health and security conditions of families that are in the sports complex, so that’s why we’re getting ready,” the director said.

Workers could be seen scrubbing a large events center on Tijuana’s east side in preparation for approval to open the facility for additional shelter space.

Dr. Jan Orient, executive director of the Association of American Physicians and Surgeons warned of the coming threat to public health posed by the thousands of migrants marching across Mexico during an October 25 interview with Breitbart News Daily. “It just makes no sense from a public health standpoint to let in a lot of people who have not been screened,” Orient explained. “I think we really need to control entrance to our county.”