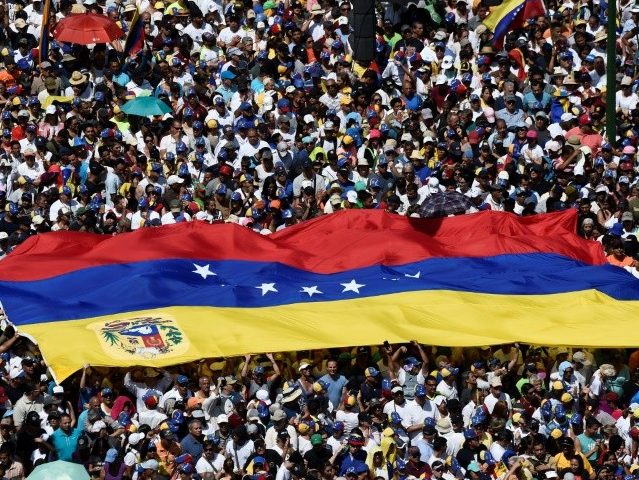 A 70-year-old socialist in Venezuela told the Agence France-Presse (AFP) in a report Friday he wants to defend the “Revolution” but is too hungry to do so, leading to his daily protests against dictator Nicolás Maduro.

Omar Monroy has taken to chaining himself to the basilica in Barquisimeto, northwest Venezuela, for eight hours a day to demand that Maduro step down. While he defends the principles of socialism, he says that Maduro’s government has become so corrupt that the system cannot properly function, hence the widespread food and medicine shortages. Monroy still expresses loyalty to Hugo Chávez, the late dictator who brought socialism to Venezuela and similarly used repressive tactics to ensure he would spend the rest of his life in power.

“I don’t have food to defend the Revolution with,” he told the outlet. “I don’t even have water!”

He admitted to being a socialist and supporting Chávez and said his decision to chain himself to the basilica is meant to launch himself to the “vanguard” of the struggle to reclaim and salvage Chávez’s socialism. He did not address the fact that Maduro has continued most of Chávez’s policies and played a pivotal role in enacting them while Chávez was alive, particularly during his tenure as foreign minister.

Monroy explained that his patience finally ran out after making a line for hours attempting to buy medications he needs to survive, ultimately not being able to find the product. “I struggle for my medicine, for my food, I struggle against an indolent, bureaucratic, corrupt State,” he said.

He appeared most irritated with Maduro’s claim that the United States was waging an “economic war” against Venezuela and that this was why so many people were going hungry.

“The war isn’t Donald Trump’s,” he argued. “We have the war right here, [against] red-red chavistas who are plugged into the system and stealing.”

Monroy is far from the first chavista to similarly denounce the Maduro regime. Socialists who claim to still be loyal to the ideal of the “Bolivarian Revolution” have surfaced for years in videos of protests, lootings, and other events triggered by the regime. In one 2016 incident, a group of hungry Venezuelans was caught on video fighting over a bag of onions, a rare food item to find in th country. One man turns to the camera and exposes a tattoo of Chávez, defending the dictator but not Maduro.

“We were Chavistas,” he said, “this old man taught us how to have a country. … [Now] we Venezuelans are killing each other over a piece of food.”

Among civilians, the biggest sign that the leftist population had turned on Maduro came last month, when the opposition coalition in the National Assembly called for nationwide protests against Maduro. Maduro sent his military deep into some of Caracas’ poorest, and most chavista, neighborhoods, shutting down schools, destroying vehicles and businesses, and beating and detaining dissidents. Journalists covering the protests described the leftist neighborhoods as looking like “war zones” by the time the troops left.

Of the at least 30 protests occurring in Caracas on January 22 – before the major protest that saw President Juan Guaidó take office on January 23 – most occurred in historically pro-Chávez neighborhoods. Including all protesters, the United Nations calculated that Maduro forces have killed 40 so far and arrested nearly one thousand people for the political convictions this year alone.

While the common Chávez supporter may now be turning at a more rapid rate, chavistas in power who saw their influence diminish under Maduro were quick to abandon him following Chávez’s death in 2013. Among the first officials to defect was Planning Minister Jorge Giordani, who split with Maduro in 2013.

Giordani led a group of ex-Chávez ministers in 2016 in denouncing Maduro’s replacements for them, claiming that Maduro’s regime had “disappeared” up to $300 billion in revenue from the state-run oil company, Petróleos de Venezuela (PDVSA). The group requested an in-depth investigation into where the $300 billion, missing from the official budget, actually went.

Another group of far-leftists challenged Maduro in 2016, organizing the “Socialist Tide” party to “save the Revolution” from Maduro’s hands. Maduro handily silenced them, organizing multiple fraudulent elections since that year to keep opposition leftists out of power.