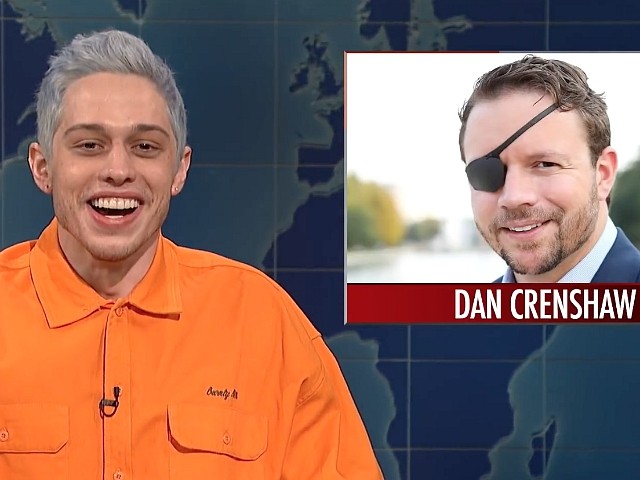 “You know my father’s a veteran, Vietnam, and I personally would never necessarily go there, but it’s tough when you’re fishing for jokes,” Thompson told NBC News anchor Craig Melvin. “That’s how stand-ups feel, like there’s no real filters out there in the world when they try to go for a great joke or whatever. You know we try to respect that, but at the same time, when you miss the mark, you’re offending people.”

“I’m sorry. I know he lost his eye in war or whatever,” added Davidson as he fought back laughter.

“He definitely missed the mark,” Thompson said of his co-star. “And I think he was more so commenting on the fact that the joke maybe didn’t land as hard as he wanted to, as opposed to being like, ‘I don’t care about veterans.’”

“I think Pete’s a very humble dude, he’s got a big heart, I don’t think he goes out to offend people,” Thompson added.

“Standups are very — they’re the ones that help us laugh through the most awful things in the first place,” he continued. “So they’re always fishing in weird places. That was an unfortunate outcome.”

Crenshaw, who is running against Democrat Todd Litton in Texas’ 2nd Congressional District, responded to the joke, tweeting Sunday: “Good rule in life: I try hard not to offend; I try harder not to be offended. That being said, I hope @nbcsnl recognizes that vets don’t deserve to see their wounds used as punchlines for bad jokes.”

Good rule in life: I try hard not to offend; I try harder not to be offended. That being said, I hope @nbcsnl recognizes that vets don’t deserve to see their wounds used as punchlines for bad jokes.

In a Monday morning interview with CNN, Crenshaw reiterated he did not want an apology, suggesting instead for NBC and Davidson to donate money to a veterans charity. “I think what him and maybe the producers at SNL should do is pool their money together. Let’s throw a figure out there, $1 million, and we will donate that to a series of veterans nonprofits that helps veterans,” Crenshaw told New Day anchor Alisyn Camerota.