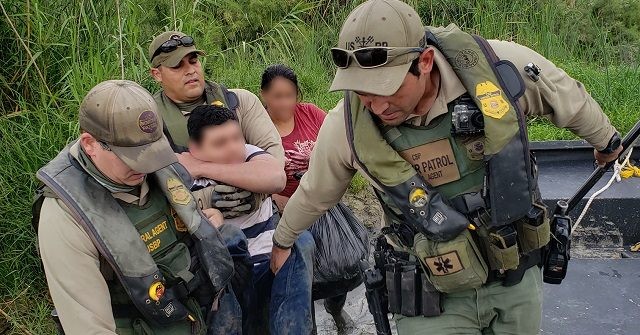 Marine unit agents assigned to the Eagle Pass Border Patrol Station encountered a special needs migrant teen abandoned in thick cane overgrowth along the Rio Grande. Human smugglers abandoned the teen, who is unable to walk, and his mother after transporting them across the river, according to Del Rio Sector officials.

The dense overgrowth of cane in the area made it impractical for the agents to carry the teen out of the area to a roadway. The agents decided to carry him back to their boat and transport them via the river where they were turned over to land-based Border Patrol agents. The agents transported the pair, identified as Honduran nationals illegally present in the U.S., to a regional hospital for evaluation and treatment.

After doctors released the family unit, agents transported them to the Eagle Pass Station for processing under CBP guidelines, officials reported.

“Those with special needs are at increased risk when crossing the Rio Grande River, an already dangerous undertaking,” Del Rio Sector Chief Patrol Agent Raul L. Ortiz said in a written statement. “The human smugglers that endanger the lives of these people are callous and have no regard for human life.”

Del Rio Sector agents have rescued several special-needs migrants who have been ruthlessly abandoned by the human smugglers operating in this region.

In May, a Del Rio Sector BORSTAR team witnessed two disabled migrants being thrown into the Rio Grande from the Mexican side of the Rio Grande, Breitbart News reported. The agents say the smugglers carried one of the migrants, a double amputee, to the riverbank and threw him into the water. The man immediately began having trouble staying afloat, according to Del Rio Sector officials.

While the agents pulled the distressed migrant toward the safety of the U.S. side of the river, the agents observed the smugglers carrying another migrant, this one a paraplegic, to the riverbank. The smugglers threw the migrant into the river and he almost immediately began to drown, officials stated. Agents already in the water swam to the distressed migrant while other agents still on the ground jumped in and completed the rescue of the first migrant.

Two months ago, Del Rio Sector agents rescued a wheelchair-bound double amputee after human smugglers abandoned him on an island in the middle of the river, Breitbart News reported.

The agents responded to the scene and learned the man was a 37-year-old double amputee from Guatemala, according to Del Rio Sector officials.

The wheelchair-bound migrant told the agents an unlikely story that he crossed the river to the island on his own and was unable to continue from there.